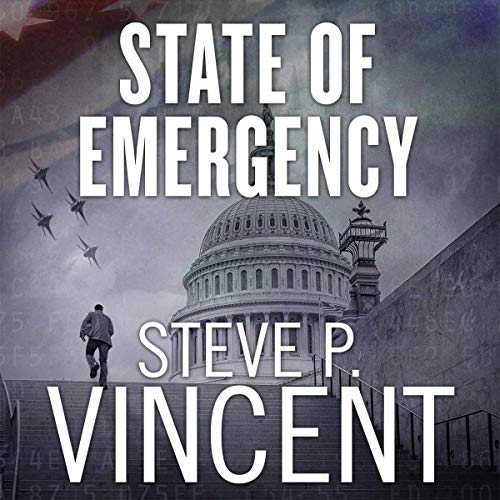 It’s interesting to jump into a book two where you don’t really remember much about book one. Thankfully with books like these is that they don’t always completely build off of each other. There are always character growth (and relationships) that will persist from book to book, but the plotline is usually so different it doesn’t need to be read back to back.  Vincent did a good job of reminding me of the things I missed or couldn’t remember (relationships, former issues, etc).

The premise of this book was super interesting to me – I’ve read a lot of post-apocalyptic books where FEMA is involved but nothing like this. Sure, it’s not a Post-Apocalyptic book but this was an about-face from the typical books where FEMA is involved.  Basically, there are terrorist attacks that just won’t stop – and FEMA jumps in to help. I can’t really talk too much more about the plot for fear of giving more away but things just go off the rails.

This book had a little bit of everything.  There was a love story, major thriller aspects, a government off the rails, and a resistance trying to stop said government in any way possible. Vincent wrote a story that flowed well and kept my interest from beginning to end.

I wanted to see this one through.  I needed to know what was going to happen.  It felt hopeless at times. I really didn’t know what was going to come of the US or the main characters.  I kept thinking that the book was over and it wasn’t.  There were so many false endings that Vincent had me questioning everything. I like when a book can do that because it means that it’s something new and different.

When a series switches narrators – it’s usually a big pet peeve of mine – but thankfully it had been long enough from the time that it didn’t really bother me. Also, there was only one book done by another narrator – so it wasn’t like there was this epic 10 book series that Vincent switched for book 11. With all that said, Todd Menesses has a great voice and it lends itself to this book well.

Overall, a book that threw me for a loop.  A book that kept me interested until the last few minutes.  A book that made me feel.  State of Emergency was a unique book that I enjoyed.

What is the true cost of security?

Amid a wave of unprecedented terrorist attacks on American soil, a panicked and inexperienced president declares a state of emergency and hands over control of the country to the Federal Emergency Management Agency (FEMA).

The quiet and unassuming Administrator Hall soon becomes the most powerful man in America. Determined to stop the attacks, Hall enforces his order across the US, using a newly empowered State Guard to deal with anyone who gets in his way.

As totalitarianism descends across the country, battle-weary reporter Jack Emery is faced with a terrifying new reality when friends, colleagues, and sources are imprisoned before his eyes. Among weekly terrorist attacks, FEMA atrocities, and the clamp tightening on every element of society, Jack becomes one of the few struggling to stop the madness.

This time though, he's on the wrong side of the law and fighting the very government he's trying to save.