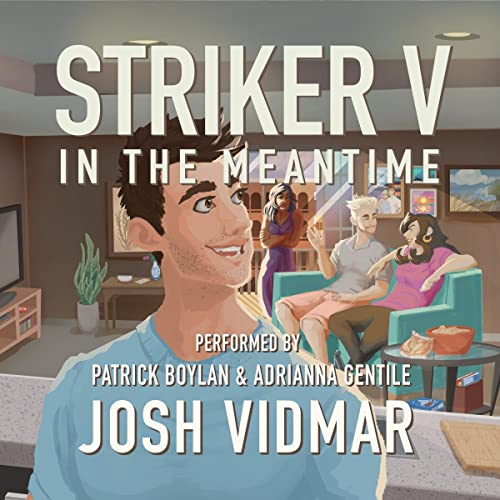 Adds A Lot To The Series

I read the first book in this series, Striker V: Elements of Change,  a while back and I really enjoyed it. It was a book that caught me off guard and I enjoyed it from beginning to end. Now, going into this I saw that it was a collection of stories and not one story – and I still knew I was going to enjoy it. Vidmar has a way of writing stories that I can just close my eyes and enjoy.

Each story brought a nice little bit to the overarching storyline of the Striker series. There were multiple times when I was reminded of the “V (aka 5)” and what that meant for each superhero. The different storylines and different character points of view really added to the story. I was worried that it not being about Neil/Striker only it was going to be a bit flat but it was anything but.

Vidmar is able to write stories that jump off of the page. In the Meantime was no different. Each character was given their time to shine and shine they did. Combine that with the great narration by Patrick Boylan and Adrianna Gentile and it’s a story that not only flew by, but one that had me enjoying every bit and piece of it.

Dive into four new original novellas in the Striker universe!

The world isn’t ending this time, so Neil Harris, the fifth superhero to bear the name Striker, can put his feet up and breathe a little easier. Even though there’s no apocalypse, there’s still plenty of work to be done, and the stakes are more personal than ever for four of Neil’s closest friends and colleagues.

“The Routine”: Colonel Ray is having a light day, and may actually be able to take the afternoon off. All she has to do is make it through a couple of meetings, and she’s home free. Easy, right?

“Mi Familia”: Family, friends, and food are the most important things in the life of Erica Ramirez, the vaunted Ventrica. When Erica’s friends encourage her to explore her interests and to finally live life, the past threatens to blockade the future.

“A Careful Balance”: Lucian has been given the task by the most powerful beings in existences, The Fates, to keep the gods themselves in check. As he can attest, the forces of Light and Dark don’t always play kind – or fair.

“Casefile 777”: At 17 years old, Tykie Georgiou has the power of luck on his side. This rare and extraordinary ability means that nearly everything works out for him. But he isn’t the only one with this power, and not everyone with it has such pure intentions.