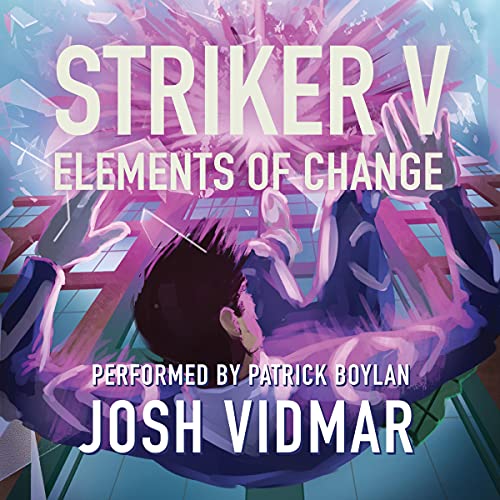 Striker V reminded me A LOT of the Supervillainy stories that I’ve read by C.T. Phipps. Like to the point that every time Vidmar mentioned “Gary” I would jump right back into thinking this was just another book in that series. Now, saying that, I mean it completely complimentary, and I might only have one point of reference since those are the only other superhero-like stories I’ve read. But I LOVE Phipps’ books so any comparison to those from me is great.

I thought that Vidmar did a great job of writing a character that was likable even if I couldn’t put my finger on why I liked him. He seemed to be a bit off and aloof but he also seemed to be going in the right direction (even when it appeared that he was going way off course).

I really found myself liking the over-arching storyline that Vidmar had – basically, superheroes are great and do all of this good, but when do they get to take a break? When can they have a little bit of time off to rest and recover? That was a unique angle I’d never even thought about before but will now every time I see or read another superhero story. Striker V being the 5th Striker was something unique as well, I know that the movies have done it when replacing one Batman with another actor – but they never acknowledge that this is the 5th batman or anything. I don’t read enough comics to know if that’s commonplace there or not, but I really liked that idea and thought that it would cause an interesting feeling – replacing a superhero once something happens to them.

Overall, I really enjoyed this one and absolutely flew through it. I really liked Striker/Neil as a character. He was funny and had me cracking up throughout. I want to know both more about him and hear more of what he ends up getting into. I also wanted to point out that I love that this is probably the first superhero story where the main character was gay. I almost didn’t mention it because it was just so natural and normal but because Vidmar included it, I thought it was worth mentioning. Their story was super cute and really added to the overall feeling that this book had (and really added to why I liked Neil even more – he was such a caring partner).

Honestly, I give as much info about the narration as I can, but I can’t tell if it’s because of the book and the way the story was told of if it truly does – Patrick Boylan’s narration reminded me a lot of Jeffrey Kafer’s – but Kafer mixed with a little bit of Steve Campbell which tells me maybe it’s a Canadian version of Kafer?). I say that because they are both some of my favorite narrators – so to combine them was great. I really enjoyed Boylan’s narration. He was able to really tell the story and make it jump off of the page.

Heroes have long been the protectors of humanity. These days, they find themselves under the employ of the government. Sure, the pay and benefits are good, but their jobs are high-stress and require long hours. As a result, Neil Harris, the fifth hero to bear the name Striker, finds his work-life balance in shambles. Every day, Neil struggles to deal with a demanding workload, maintaining his relationship, and finding time to simply relax. Something is going to give soon, and he feels like it might just be him. The superhero novel for those who can’t quite find the time to listen to an audiobook.