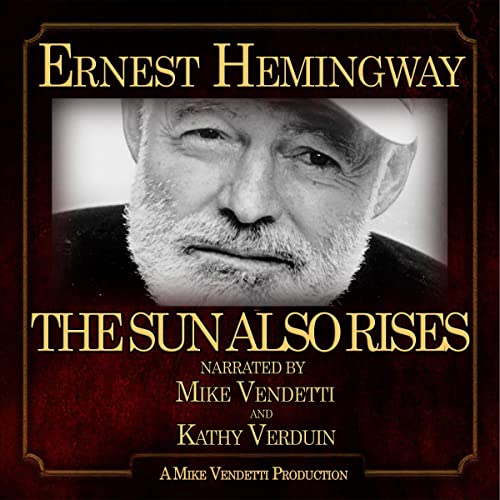 A Great Performance of a Classic

I think one of the hardest things to do, especially when reading a book many years after it was published is to write a good review for it. In this instance, I checked this book out not because of it being Hemingway and I’ve honestly never read anything from him before – but more because of the narration. I enjoyed Mike and Kathy’s narration of The Great Gatsby (another classic I’d never read). And I knew that I wanted to check out more of their work.

So, I’m going to be reviewing the book a little but the narration a lot more. So, the book (or books in this case) it/themselves were… fine. Hemingway seems like he is one of those authors that you either love or hate. And weirdly I’m sort of stuck in the middle. There were times that the way that he writes just felt… jumpy. It’s hard to describe but there were just lines that felt repetitious or unnecessary.

The story itself was interesting and, as I said above, one that I’ve never read before. I was intrigued by it even with some of the flaws that I found in his storytelling ability. Also, a bit of my movie nerd came out and all I can hear is the teacher talking about this book in 10 Things I Hate About You (his quote was “Okay, then. What did everyone think of The Sun Also Rises?”)

Overall though, the performance really shines. Even with the issues I mentioned above both Vendetti and Verduin really knock this one out of the park. I love hearing books performed so well and this one really shined. I’m glad that I was able to both check out a classic and listen to such a great performance of it.

Travel with them through pre-WWII Europe as Hemingway explores the dysfunctional relationship of friends drawn together by a beautiful, troubled, and often confused woman, plus the drama and excitement of the bullfights.

The Sun Also Rises chronicles the experiences of Jake Barnes, a wounded war veteran now working as a journalist in Paris in the aftermath of World War I, and his American and British expatriate friends—among them his occasional love interest, Lady Brett Ashley—as they search for meaning and purpose in their unmoored lives. The novel’s plot climaxes in Spain, during the running of the bulls in Pamplona, in a series of events that illuminate both the strengths and shortcomings of the characters’ lives.