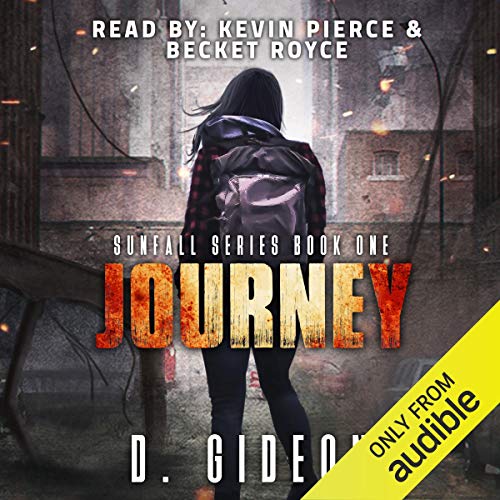 The Start of Something Interesting

Sunfall: Journey was refreshing for a post-apocalyptic book.  Sure, it still takes place in a bigger city and involves people trying to bug out to a safer location, but it follows a group of teenagers in college for some of the story.  I haven’t read too many books with a college-aged protagonist who was also familiar with the prepper mindset (or at least enough to have some things on hand if things ever went south).   Some of the college-aged kids were prepared and others were not.

It also follows Ripley’s grandmother at her home and the struggles that she faces trying to save herself (and wait for her family to make it home). It was just a nice change of pace, especially following the college students.  I liked hearing what would happen and how most people would shrug it off as just a few-day issue and not a big problem. That felt incredibly realistic to me.  Most people are stuck with a normalcy bias and don’t realize that things are going south quickly.

The interaction between Ripley and her friends is easily the most memorable part of this story.  It happened exactly as I pictured it would.  There were “end of the world” parties thrown by fraternities on frat row, people were completely and utterly unprepared, and some kids think that they ‘deserved’ more than they were being offered.

Unfortunately, there were a few parts to the story that took me out of the moment.  Both of them came near the end of the book.  One of them was where Ripley just couldn’t get herself into the mindset (even though she seems to have been mostly in the mindset since before the CME hit).  I just had a hard time with back-and-forth characters like that.  She was definitely a mini-prepper before this happened having made up plans, routes, and a go-bag.  But she also couldn’t believe what was going on around her or doing things that would be harmful or take from others (that she would never see).  It wasn’t enough for me to stop reading by any means, but it did pull me out of the story a little.

Overall, Sunfall: Journey was an enjoyable change for the post-apocalyptic genre without being too different.  There are definitely parts that I’ve read in every other book, but they were sprinkled into new or fresh stories.  I took a full star away from my review because the book doesn’t’ really have an ending.  I am 100% fine with a series of books, but you have to give me some sort of story arc. This one felt like it was split up on purpose to make two (plus) books out of one.

The narration for Sunfall: Journey was done by both Kevin Pierce and Becket Royce.  You’ll recognize Pierce’s voice (and presence on this blog). He is one of the “go-to” voices in post-apocalyptic fiction, so I completely understand why Gideon chose him to be one of the two narrators.  The other narrator is Becket Royce, who I have never listened to before this book.  She does a really nice job voicing the “motherly” character in this book and I would definitely listen to more books narrated by her.

Ripley’s a tomboy at heart who has never met a stranger. Her plans were to finish her veterinary studies and take her family to the country, where life wouldn’t be such a struggle. She thought the worst she’d have to deal with at the University of Maryland were the unwelcome advances and attitudes of affluent students, and the occasional East Coast hurricane.

She never expected the sun to fall down.

An immense coronal mass ejection, the likes of which the modern world has never seen, blankets the Earth and destroys the power grid worldwide.

Ripley has no communication with her family at home and – thanks to the University’s zero-tolerance policy – no weapons to protect herself. Society is becoming increasingly panicked and desperate, and the government seems slow to respond.

The world, as she knew it, has ended. A new world of lawlessness, betrayal, and scarcity is beginning.

Can she become the woman she needs to be so that she and her friends can make it home?

With the thin veneer of a civilized society collapsing, can she even survive?

The Scourge Series: The Complete Trilogy

Audiobook: Into The Outside by Lynda Eng