Table for Two by Kate Gavin (Narrated by Anastasia Watley) 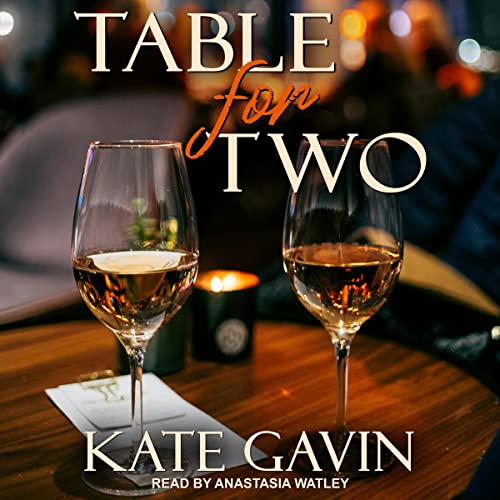 Super Cute. Had Me Smiling Throughout.

I needed a book that was light and interesting and one that I was able to finish quickly. Table For Two had all of these things and much more. I honestly picked it up because of Watley’s narration. I’ve been really enjoying the books she’s narrated lately, so I jumped at the chance to review this.

Table For Two starts off by showing two very different main characters. Reagan and Jillian are both powerful women, but in completely different aspects and careers. Jillian is a powerful player in the high-stakes marketing field, while Reagan is the owner of three local restaurants with her executive chef best friend. They have a chance encounter when they both try and get lunch at the same time. Things are tense and it sets off a series of events that even I couldn’t have predicted.

I would say that Table for Two was definitely a slow burn (even though it opens with a hot dream scene) mixed with an enemies-to-lovers and a definite ice queen thrown in. They weren’t really enemies (I feel like you have to know someone and have more than one lunch interaction with them to become enemies). That being said, I’m not trying to categorize this because it was so much more. The aspects once we find out who Jillian really is and why she’s the way she is were fascinating. The interactions with her mother were heartbreaking. And the overall self-worth she had because of all of that broke me.

I also wanted to point out that I loved Gavin’s inclusion of a non-binary character that was adjacent to Jillian (her assistant). It was mentioned that each person that worked for her had their preferred pronouns listed on their nameplates. Her assistant had they/them – and Gavin just had it as part of the story. It wasn’t talked about and everyone respected it. The amount of joy that it brought me in the scenes where they were talked about openly and called the proper pronouns was palpable.

Overall, Table for Two was such a cute book. It had so many good scenes dealing with difficult families, protective friends, tough work situations, and forgiveness. It had everything I was looking for and more.

Anastasia Watley is definitely in my top three narrators – especially for sapphic fiction. She has this… smokey/sultry voice that works really well for ice queen-like characters. It gives the characters this air of power and/or money. But, she’s also able to be a character like Reagan who is just like kindness and happiness incarnate. Her narration really added to this story and made it better.

Trying to take a few brief moments away from a stressful situation, Reagan Murphy snags the last table at a bustling downtown lunch spot. When another woman walks into the crowded restaurant seeking a table, Reagan offers to share hers.

Jillian Jacobs just wanted a quick bite before she’d have to focus on a new and unreasonable deadline. Irritated by her empty stomach and by the prospect of waiting, Jillian resentfully accepts a seat at a stranger’s table.

Their shared lunch is filled with hostility, snide comments, and shades of derision from Jill, and Reagan finds herself relieved at the end of the encounter.

But then the two are thrown back together when Jill becomes a catering client of Reagan’s. Soon navigating a professional relationship becomes complicated as their attraction begins to smolder. Will it get in the way and cause even bigger problems? Or will this be the start of something they’ve both been looking for all along?

Thrust by Rachel Spangler (Narrated by A

The Woman In 3B by Eliza Lentzski (Narra