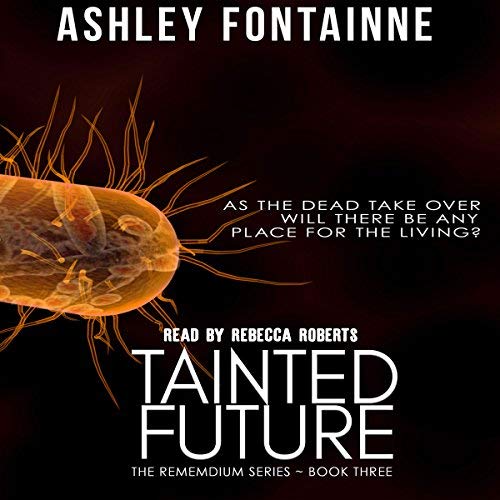 They thought surviving until now was tough

Tainted Future shows that there is more to be afraid of than the zombies.  The world has turned upside down and now even cities are being destroyed.  What will a family do to survive?  What is the government doing to help anyone?  Is anyone finding a cure?  These will all be touched in Tainted Future.

The narration for Tainted Future was done by Rebecca Roberts who crushes it again.  She has been the perfect narrator for this series so far, and I couldn’t imagine another narrator reading these stories to me.

This almost could have been an alternative to book one.  There wasn’t too much that tied it too hard to the other stories, and it felt like the survivors were just dealing with the problem for the first time.  There’s nothing wrong with that, I just remember looking at the title to make sure that I was actually listening to book three.

Tainted Future was a fast paced survival book.  Taking place within the headquarters of different survivor groups and showing some of the damage done to the people, society, and the cities around them.

While I’ve been enjoying this series a lot, the abrupt endings are killing me!  I like the story and the characters, but I also want a feeling of closure.  Fontainne knows how to keep you coming back for more, that’s for sure.

Everything they know is gone. The old world obliterated in less than 48 hours. They soon discover they aren’t alone, and other dangers besides the undead lurk in the forests. The new law of the land: kill or be killed.

Dr. Everett Berning and his team seek refuge in the underground lab in the Ozark Mountains. The first week after the collapse of civilization, those who made it out alive struggle against the odds to survive.

Only a handful escaped the devastation in their hometown of Malvern, Arkansas, and they grapple with the new reality. Tired, frightened, and mourning the loss of loved ones, they attempt to regroup and cope with the life-altering changes.

When one suffers a debilitating injury, they are thrust into a tenuous relationship with Dr. Berning’s group. Other survivors battle the odds as they flee treacherous cities destroyed by the government and crawling with reanimated corpses.

Unfortunately, they all are about to discover the roaming dead aren’t the only threat they face. As the world plummets into darkness, things will never be the same. Ever.