The Takeover by Darren Wearmouth (Narrated by Steve Campbell) 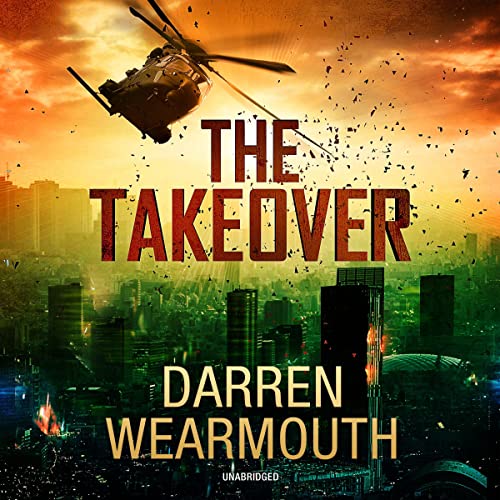 Seeing a new book from Darren Wearmouth that was narrated by Steve Campbell? I’m in! I’ve enjoyed Wearmouth’s books (solo and collaborations) and Campbell has been a narrator I’ve enjoyed from the first book I’ve picked up that he narrated. So, seeing these two working together I knew I had to pick this one up and listen to it quickly.

This one does not hold anything back. Within the first few moments, the book basically says “buckle up” and it’s ON. There wasn’t a moment that I felt like I could take a breath because Wearmouth put the pedal to the floor and never let up.

The Takeover is sort of a mixture of a zombie, a pandemic, an alien invasion, and a post-apocalyptic book. Those genres all work extremely well together, this book was so unique and interesting it’s hard to pin down to one genre. The main characters were really interesting and I wanted to find out what was going to happen to them. Each scene as the book progressed felt like it was needed and honestly, there wasn’t a second in this book that felt like it was there for fluff or to “move the story along”. Wearmouth was able to do that with pure action (or running from pure action).

I mean, not trying to spoil anything, but the scene at the tower… mixed with the scenes where things change with the infected… so good. I realized I couldn’t talk about probably my favorite scene because it would spoil a pretty interesting part of it. But I do remember the scene when his phone gets more service that had me legitimately go “whoa” out loud while reading it.

Oh, and that’s all without mentioning that the story took place around 25-50 miles from where I currently live made it all the more real. The literal opening of the book takes place in Niagara Falls, Ontario and I live just over the falls from there.

Knowing it takes place in Canada and getting a Canadian narrator worked out well. Campbell has done a great job hiding his Canadian accent in most of his work but in this one, he got to let it shine a bit. Now, there wasn’t a ton of “over-Canadian” Ontario-specific slang, but it was just nice to have a book with a Canadian main character voiced by a Canadian narrator. And Campbell did a great job – matching the energy and intensity that Wearmouth was writing into The Takeover.

Thousands of years ago, the world’s population shrunk to a dangerous low….

Nobody could say why with total confidence….

A strange vine is uncovered beneath the remains of a lost civilization. Before anyone can examine the alien plant, pink pollen erupts from its huge buds. Moments later, 99 percent of the archeological team freeze like statues, but only for a minute. They brutally attack anyone unaffected by the phenomenon, dragging victims away for what becomes a chilling evolutionary process beyond anyone’s worst nightmare. As this happens, the pollen drifts toward the wider world.