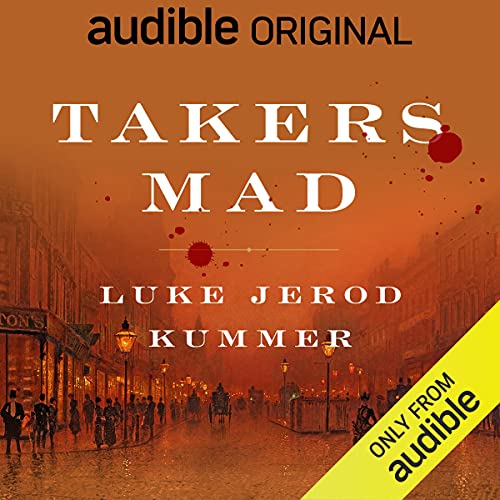 Flora Jumped Off The Page

While not normally a genre that I read, historical fiction, when done right can absolutely knock your socks off. Takers Mad was one of those stories that had me barefoot from almost the beginning. I think it was Kummer’s writing style mixed with the fantastic performance by Khristine Hvam that really sold it for me. Hvam absolutely nails the time period, pacing, and overall feel that I think Kummer was going for.

Going into it, I didn’t have a ton of background on this period or this story. But I dove in headfirst and honestly felt like Kummer had me on the struggling for breath for the rest of the story. It’s not overly fast-paced but it’s perfectly paced, in that it kept me wondering what was next instead of living in the moment. But, I say all of that to say that the character development and the way that each place was talked about knock the pacing out cold. They all worked together so well to tell this interesting and unique story.

As I mentioned above, Hvam is the perfect narrator for this. She captured my attention from the opening lines. Mix that in with Kummer’s writing style and I was enamored. I think every scene that started to “fall off” Hvam would kick it up a notch and just blow me away.

Overall, Takers Mad, while not a story I expected to love… I ended up falling in love with it. Sometimes you need the right story to find a genre you enjoy. And this one was right for me. I think Flora as a character was perfect. She is someone I felt like I could transport into now, changing up the language a bit, and I’d read lots of stories about her. She was one of those “one of a kind” characters that I won’t soon forget.

A tantalizing drama pulled from New York’s gritty past, Takers Mad guides listeners down a shadowy path to explore a true crime that haunted the Gilded Age.

As newspapers reported in the 1890s, a woman dubbed “Shakespeare” was found dead in a seedy hotel along the waterfront by Manhattan’s South Street Seaport. The chilling scene recalled for press and police alike Jack the Ripper’s victims in London. Panicked New Yorkers worked feverishly to halt that maniac’s spree from expanding across the Atlantic. The city only sighed relief after detectives abruptly arrested a traveling Algerian ex-soldier for the crime.

In this reimagining, our narrator Flora—an aspiring pulp writer who grew up worlds away from Manhattan—arrives at the story over a decade later, after her dreams of a perfect wedding are dashed. It turns out Jacob Riis, the disapproving father of Flora’s new groom, and America’s most famous muckraker, played an unexpected role in this mystery earlier in his career.

As Flora digs into the case, more questions about what really happened in the hotel on that monstrous night begin to reveal themselves. Did the police scapegoat the man arrested for the crime? What about the blood that detectives found? Or did authorities actually let Jack the Ripper walk free? Flora hopes if she unlocks these puzzles, it might win over her father-in-law, plus grant the entrance to New York publishing she craves.

Based on historical research and fresh findings in a real-life case that dominated headlines before the turn of the century, Takers Mad is a ruminative, atmospheric, and sometimes morbidly funny work of literary suspense that follows one of the most memorable heroines in recent crime fiction as she stalks Gotham, confronts corruption, and delves into who really murdered “Shakespeare”.