Talon the Slayer by A. A. Warren (Narrated by Travis Baldree) 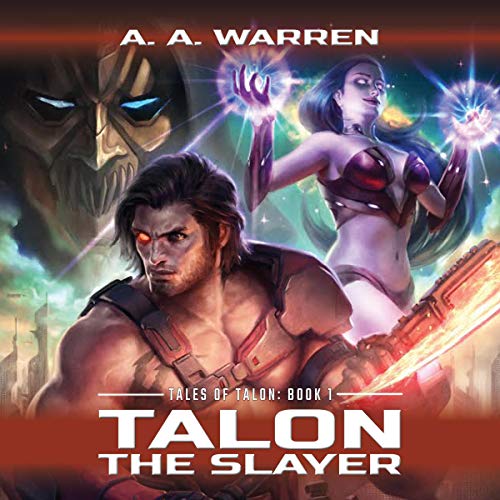 A Blast To Listen To

Warren’s book – Talon The Slayer was a book that I’m having an impossible time figuring out what genre it lives in. At it’s heart it’s a story about redemption.  A story about finding yourself.  But it’s set in a futuristic world where aliens are the norm (honestly, humans are the aliens in this world). Where slavery is very real again and Colosseum like fights to the death happen all the time. Talon is one of those fighters and he’s about to eclipse his 100th match.  The match that will set him free. Little does he know that things are about to hit the fan once he finishes his battle.

The story was a blast to listen to.  I absolutely flew through it – doing far more yard work than I needed to do yesterday just so that I could listen to another few minutes.  Warren created a fantastical world that he described in vivid details without being boring about it. He created characters that I not only liked but I was fighting in my head for them to succeed.

The story itself was also great.  Talon’s inner struggles, relationship confusion, and overall “vibe” were perfect for him.  If you threw him into a battle-like situation he would take control. But once you gave him some personal freedom he wasn’t sure exactly what to do.  It made for a unique and interesting main charter.

Travis Baldree was perfect for the narration of this.  Warren created a slew of characters that all had different and unique voices and Baldree is able to shine when he’s voicing at least 4 different people.  His narration definitely made a good book even better.

I can’t wait to get into more stories in this universe. Though I have no idea where Warren is going to take us!

There’s also something to be said about the cover of this audiobook.  When creating a new and unique world – sometimes it’s hard to picture what the characters look like.  The cover of Talon The Slayer shows three of the main characters and I’m ashamed to say I’m glad they did because it made the book even easier to listen to. I didn’t have to go “who do I think Talon looks like?” Or “a mask, well, what kind of mask?” I was just able to read and enjoy the story that Warren laid out for me.

Talon the Slayer by A. A. Warren
Narrator: Travis Baldree
Length: 9 hrs and 11 mins
Series: Tales of Talon #1
Published by Self Published on March 29th 2019
Genres: Fantasy
Format: Audiobook
Buy From Amazon
Buy from Audible

A warrior without a past is the galaxy's only hope for a future....

Talon is a man without a past. A slave, a gladiator. His only memories are a lifetime of bloody combat in the arena. But when a chance encounter with a seductive alien sorceress plunges him into an intergalactic war, he finds himself fighting for the ultimate prize...his freedom.

As Talon and a rag-tag crew of allies embark on a vital mission for an exiled prince, they are pursued by an ancient warlord who has unleashed the most destructive force in the galaxy. The key to stopping it? Talon's lost memories....

If Talon cannot unlock the secrets of his past, his newfound freedom will be lost, and the fires of annihilation will consume the galaxy. Wielding a plasma axe and an indomitable will, he must triumph over the evil forces that stand in his way. He must be more than just a warrior. He must become...Talon the Slayer.

Dive into a galaxy of high adventure! Fans of Conan the Barbarian, Flash Gordon, and Guardians of the Galaxy will love this high-octane mix of science fiction and fantasy action.

Carnival Row: Tangle in the Dark by Step