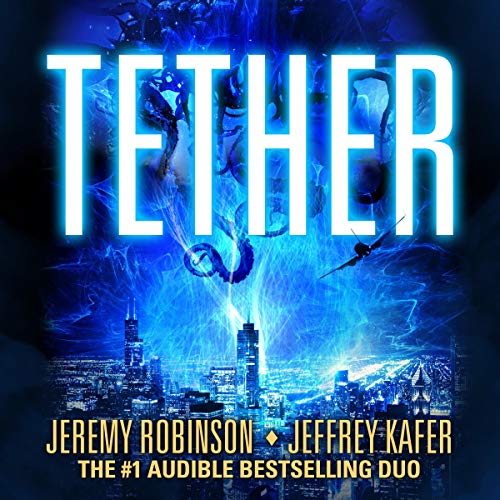 First and foremost – cheers to Audible and ACX for having this book available for pre-order.  Second for having such a great hero image there (at least before the book released).  If you missed it, here it is in all its glory:

Going into this I didn’t read a single thing from the synopsis.  I went in completely blind and I loved every second of it.  Robinson knows how to write a story without a ton of filler and knows how to write well-crafted interconnected characters like few others in the business.

The only thing I knew going into it was that this was going to be a Kaiju story.  For those not in the know, a Kaiju is “a Japanese word meaning “strange creature”. In English, it has come to mean “monster” or “giant monster””.  So, I knew giant creatures – but that was it.  Obviously from the amazing cover art – I saw that they were giant and tentacled. What I didn’t know was how incredibly original this story was going to be.  In chatting about this on twitter I said:

I realize that I cannot really dig into much of the story without giving a lot of it away – but know you’re in for a lot.  The main character is a nice-guy who is genuinely working on putting his foot down.  The story is as much his journey into being more forceful as it is about giant and insane monsters. I enjoyed the down to earth touch of Saul’s character. He was such an “every man” that I didn’t even question his motives.

Overall, a great and original Kaiju story that I’ll be recommending to others.

In the middle of the night, an explosion rocks Cambridge, Massachusetts and wakes Saul Signalman from bed. Blue, ethereal light pulses into the sky. A FaceTime call pulls him away from the view. It’s his wife, consumed in light, bidding him farewell. And then – the call ends. The explosion of light intensifies. The power goes out. Electronic devices stop working. In the dead of night, he races to his wife’s lab at the explosion’s core, but the building is missing.

His wife is gone.

All that remains is a test subject: Rain, a woman with no memory, whose eyes glow when she comes into contact with unseen forces, whose body lights up the night when monstrous nightmares descend on Boston, and whose creators will do anything to get her back.

Pursued by a rogue government agency, Saul goes on the run with the only person who might be able to explain what happened to his wife. Rain might be able to reveal what kind of person Saul’s wife really was, and how to stop the otherworldly terrors wiping out cities.

With Tether, Jeremy Robinson, the number one Audible and New York Times best-selling author, returns to the literary genre he created – the kaiju thriller – and turns it on its head, transporting the listener into the strange, and then beyond, into the supernatural.