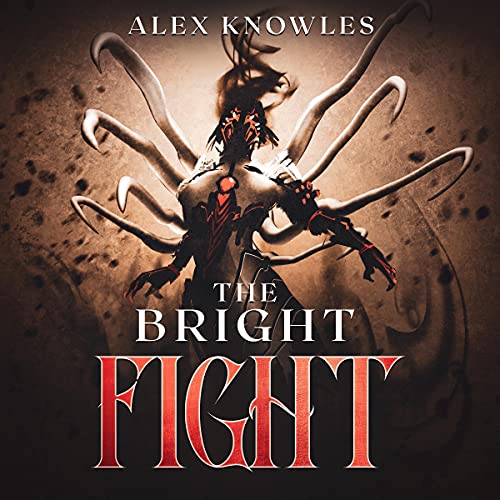 I can’t believe that I started and finished this yesterday. I had a migraine and I was having trouble focusing on anything, so I thought I’ve enjoyed this series so far, let’s put it on and see how it goes. I didn’t expect to look up at almost 2am as the end of the book played. Knowles really knows how to grab my attention and keep it for hours on end.

The Bright Fight was another great book in this series and one that I obviously enjoyed since I finished it in one day. I know that some people aren’t a fan of shorter books like this, but when you read as much as I do, I need books that jump around in length so that I can split up the stories and remember them. I also need a “win” from time to time, and by that I mean a shorter book that I can get through quickly. Knowles has provided that but hasn’t held back on any of the action or entertainment. I’ve gotten more of that out of The Bright series than I have out of 18 hour stories.

The thing I’ve called out in the first two reviews was Knowles’ ability to create and make interesting characters. Now, we’ve met most of the people in The Bright Fight, but we were introduced to a new character in this one more than half-way through it. And once this specific character was created, I instantly felt like I was transported to the Dragon Mage and Clockwork Chimera words created by Scott Baron. I know part of it was because I was tired but suddenly I was like “wait, this really reminds me of the world that Baron built“. Now, I say that because of a specific character that was introduced and because I haven’t read a world that was as well described as that one in a while – but it’s high praise in my eyes.

The Bright Fight wasn’t action-packed but it wasn’t lacking either. Knowles did a good job of going through the personal stories and introducing some more lore into this world. I could tell that things were going to be winding down in some ways and amping up in others. I like that and I thought that the ending, even though it was still a bit of a cliffhanger, was excellent and leaves things in a place where I could write my own ending in my head, or better yet, continue on with this series as Knowles writes them.

One rescue complete. Forced onto an unwanted path. Tytan and the Moeru-hi fight back.

Saving Rair had a steep price; Tytan and RJ are separated from their loved ones and only have a short time to recover before they must embark on an even more dangerous mission.

Racing back to Kraydon to save the sacred Lanthian, Tytan is brought to the razor’s edge of sanity by the Mara’s torture of Sin and Anders. Time is again running out for the Bright Lord and those he loves.

“To kill a god, you must become a god,” echoes in his mind. There’s only one problem.

To save everyone, to achieve apotheosis, Tytan must first die. For good.