The Bright: Revelation (The Bright #4) by Alex Knowles (Narrated by Stephanie Nemeth Parker) 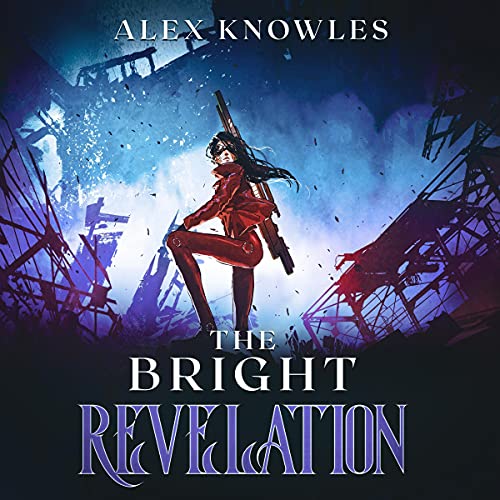 Check out my review of the first three books in this series: The Bright Lord, Retaliate, The Bright Fight. The Bright Revelation takes a different turn and introduces a “new” main character. We find out very quickly that we know who Ella is (but since the synopsis doesn’t spoil it, I won’t either). The parts leading up until we realize who she is were interesting and once we figure it out – it gets even more interesting. Numerous times through, she’ll mention who she is or who she knows and it’s one of those moments where everyone in the room stops. It’s pretty cool.

Very similar to the introduction of The Bright Lord, we meet Ella as she’s starting to learn about herself and her new surroundings. She can “see” her bright and some other things, but she’s completely blown away by them and has no idea what’s going on. Oh, and she’s being held captive by aliens/creatures she’s never seen or heard of before. It’s all very dramatic.

Then Knowles pulls the rug out from under me and introduces some love interest – I’ve never really listened to Sci-Fi Romance, but when and how Knowles wrote it, the way that it started to where it ended up – I ended up really enjoying the romantic scenes. I didn’t expect to, but hey, no complaints. The inner battle that Ella has is playing in the background throughout the story was probably my favorite part of this. She feels, basically, two ways at the same time and she has a lot of trouble understanding and coming to terms with that.

Similar to the other stories in this series, as soon as we start to feel like things are okay – they get thrown into chaos again. Set among the same issues that were happening in the first three books, The Bright Revelation was excellent, telling a story from another point of view and showing us the female side of things. Not just in this world, but things that we thought we knew and understood in the first three books.

Add in the excellent narration from Stephanie Nemeth Parker who took this series over from Steve Campell (since the POV and gender switched) and you have a book that I thoroughly enjoyed. I know this is considered book four in the series and it definitely is, there would be spoilers to the first three books if you read it without them – but it’s a “brand new” story or at least a brand new point of view.

A system that humans shouldn’t have access to. Abilities no one dreamed possible.

After an accident which should have killed her, Ella’s life is torn asunder. She’s on the wrong side of the galaxy when she’s told her husband is a liar, a cheater. A murderer. Unwilling to believe what she’s being fed, she uses her new, unfathomable abilities to break free of her “saviors” to make her way across the stars. Toward Earth. Home. Her family. And the truth.