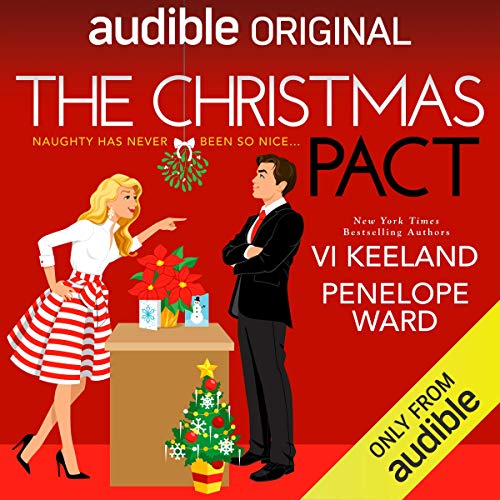 I really needed a light-hearted book to get me through this week.  It was one of those weeks where everything just seems to pile on. Enter The Christmas Pact.  A Free Audible Original for December (and apparently will be added to the Audible Escapes in January – this was just the right length, the right story type, and ended up being just the book I needed to get me out of my funk.

The Christmas Pact is a cutesy romantic comedy similar to the hour and a half Hallmark Christmas movies. It even had a cheesy scene near the very end that was akin to those movies.  Though there wasn’t a “then Christmas came, the snow fell, and they had a perfect kiss because they realized they needed each other” moment – close, but not as predictable.

The story itself was strong – a great book packed into a small package.  Just under three hours – this was the perfect book for me to finish up in one night. I’ve never read anything from either of these authors but I thoroughly enjoyed this one. Also, I’ve heard nothing but praise for Andi Arndt and I can see why.  She is a fantastic narrator and really helped bring this story to life.

If you’re looking for a quick, cute, Christmasy read – this one’s for you. Especially if you’re and Audible member.

Riley Kennedy’s emails keep getting crossed with her male colleague, Kennedy Riley. The infuriating man forwards them along with his annoying commentary and unsolicited advice. At least she never has to see him in person, since they work in different locations…until they come face to face at the office holiday party.

As luck would have it, Kennedy turns out to be outrageously handsome…though still a jerk. Yet somehow he’s able to charm her out on the dance floor—and convince her to participate in his crazy scheme: he’ll go home with Riley for a Christmas party and pretend to be her boyfriend, if Riley agrees to be his date to a wedding. It sounds easy enough. Little by little, however, the act they’re putting on starts to feel like so much more than a Christmas pact—and Riley’s about to learn there’s more to Kennedy than she ever imagined.

Romance audiobook dream team Vi Keeland and Penelope Ward join forces again to deliver an engaging, funny, and sexy story that will make listeners laugh while it sets their hearts racing. Narrated by the double audio act of Andi Arndt (inducted into The Audible Narrator Hall of Fame in 2017) and Sebastian York, this sizzling novella will heat up the holidays…all year long.

The Love Song of Ivy K. Harlowe by Hanna