Audiobook: The Culling by Ramona Finn (Narrated by Stacey Glemboski) 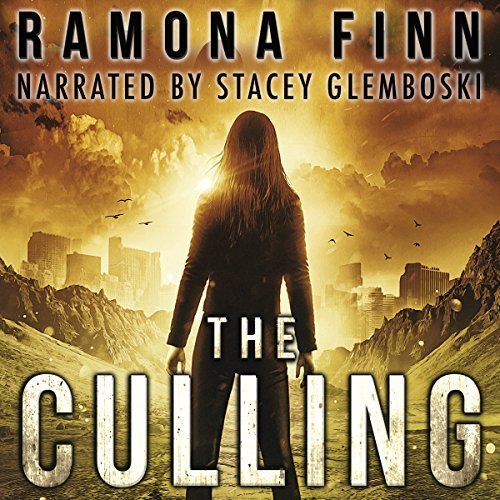 Glade Io is a Datapoint. She has been groomed by The Authority to carry out the Culling. It’s her job to cull anyone showing violent or murderous tendencies. She wholeheartedly believes that she is making their world a better place to live in, but that all changes when she is kidnapped by a rebel group known as the Ferryman. While in captivity, she learns that what she believes to be true, may not be and that The Authority is different than she was led to believe.

I have the kindle copy of this since it came out but never got the time to read it and to be honest, I was getting a little fed up with the tropes in the dystopian genre. But when it came to audio, I jumped at the chance to listen. Well, The Culling was awesome!! It was so much better than I thought and I flew through it.

I really liked the idea of the plot. The Earth is uninhabitable, or so the Authority will have you believe, so everyone lives on different planets in the solar system. The Authority rules all and has a firm grip over everyone. Every few years, they use the Datapoints to Cull the population. With the use of their biotech, they are able to determine who will show violent or murderous tendencies and they then cull them. The plot held a steady pace and kept my attention throughout.

I really liked Glade Io. She was brave and wasn’t like the rest of the Datapoints. Even though she was brainwashed since she was young, she didn’t enjoy her job and did wonder about it. The only reason she kept doing it was because she wanted to save her sisters from the life she has to live. Once she gets kidnapped and meets Kupier, she starts to question everything and is determined to get to the truth.

In all, The Culling was a great read. I mean, it does follow the usual pattern of girl realizing the bosses are evil, girl also finding out she is special and the only one able to either stop them or help them destroy the world, and there is always a boy!! Even with this formula, I still ended up loving it. The world building and character development were awesome and I can not wait to read the next one!!

Stacey Glemboski read this really well. She portrayed Glade perfectly and her tones and cadences brought the story to life. She was easy to listen to and I loved her performance. I will have to check out more by her.

In a solar system where The Authority decides who lives and who dies, only one of their own executioners can stop them.

Glade Io is a trained killer. Marked at a young age as an individual with violent tendencies, she was taken from her family and groomed to be a Datapoint—a biotech-enabled analyst who carries out the Culling. She is designed to identify and destroy any potential humans that threaten the colonies: those marked as lawbreakers, unproductive or sick. But when she’s kidnapped by rogue colonists known as the Ferrymen, everything Glade thinks she knows about the colonies, and The Authority that runs them, collapses into doubt.

Pulled between two opposing sides, and with her family’s lives hanging in the balance, Glade is unsure of who to trust—and time is running out.

Also by this author: The Glitch

One thought on “Audiobook: The Culling by Ramona Finn (Narrated by Stacey Glemboski)”