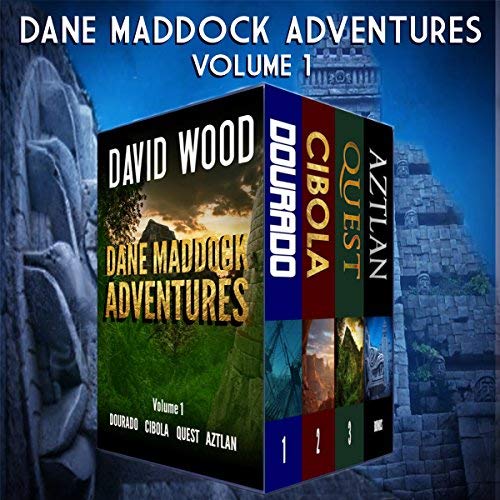 Need an Adventure Fix and on a Budget? Check This Box Set Out!

This is part of a bigger box set that I have out but I wanted to break the reviews up into book-by-book since that’s how I do all the other ones. I’ve read a few other books in this series and the other series related to Dane and Bones – but went back to the beginning with Dourado. It was cool to go this far back to see what Wood used to do as an author (how he’s improved and the “winning” moments that he’s kept in most of the books.

I usually call out the narrator later – but there was something that Kafer did in this book that I don’t think he does anymore.  When a phone call (or radio call, I believe) happened – he would distort the audio a little to make it sound like it was coming from a radio/phone. I absolutely loved that. I don’t know if everyone would – but in books like this, it was a really nice effect without going overboard.

Dourado was an interesting story.  I couldn’t really tell what the “treasure” part of it was going to be.  There was a part that I thought “okay, I think the book could end” but there was another couple of hours.  It was nice, and kept me on my toes! The lead up to the ending was perfectly thrilling without being overdone – a classic Wood tactic.

Overall, I thought that Dourado was enjoyable and definitely a great lead into this box set.

Cibola introduces us to Jade Ihara (a staple in later books) and it didn’t go the way that I expected it to. Leave it to Wood to write me a story (especially since I’d read further books in this series) that just blew my mind when it came to Jade. This book did revolve around Jade quite a bit but it was still definitely the Dane and Bones show.

Their back and forth banter and ability to play off of each other in any situation really make these books for me.  They always crack me up and Cibola was no different.

The story (and legend) in this was awesome.  I’ve heard of this one but the way that Wood writes it out.  The people and organizations that he picks to be the antagonist are so topical it’s ridiculous (even years after this was written and recorded).

If you have enjoyed any of the other Dane Maddock stories or if you’re just a fan of Adventure novels – Cibola will definitely be a winner for you.

Jeffrey Kafer is the perfect voice for this series – I know that I’ve listened to quite a few since these original books came out, but Kafer just crushes it.  He’s able to voice Dane and Bones in just the perfect way.  Especially the way that they play off each other.

As anyone who reads my blog or reviews know; I love Jeffrey Kafer’s narration.  He does such a great job narrating that you forget that you’re listening to a fictional book.  He’s just able to bring the characters alive and make you forget you’re reading altogether.

I had to take a day or two after reading Quest to actually come up with a description that wasn’t full of hyperbole.  I enjoyed this story so thoroughly that I was in a book hangover once I finished.  About midway through, I realized that this was the third book in the Dane Maddock series, and quickly and frantically searched for more of them, to quickly realize that I already own some of them. (Yay me!)

The adventures that Maddock and crew take will bring the reader to numerous places both in the cities and deep in the Amazon.  The search and discovery parts made for a really fast-paced fly by the seat of your pants kind of adventure.

If you’re at all into an adventure that’s mixed with some amazing historical research — Quest is definitely for you.  I will be quickly checking out the other Maddock stories soon.

This short story was, I believe, less than 30 minutes long.  But wow did it ever make me feel. I won’t really go into what happened since it was such a shock (and it’s super short and easy to read).  Just know that you are in for all the feels when you start and finish Aztlan.  It was such an interesting short story that grabbed my attention from the beginning.

Looking for a modern-day version of Indiana Jones? Dane Maddock is your man! This box set includes the first three books in the Dane Maddock Adventures series plus a bonus story.

A sunken treasure. An ancient Biblical artifact. A mystery as old as humankind.

In 1829, the Portuguese brig Dourado sank off the coast of Indonesia, losing its cargo of priceless treasures from the Holy Land. One of these lost relics holds the key to an ancient mystery. But someone does not want this treasure to come to light. When her father is murdered while searching for the Dourado, Kaylin Maxwell hires treasure hunter and former Navy Seal Dane Maddock and his partner Uriah "Bones" Bonebrake, to locate the wreckage and recover a lost Biblical artifact, the truth behind which could call into question the fundamentally held truths of human existence. Join Maddock and Bones on a perilous adventure that carries them from the depths of the Pacific to ancient cities of stone as they unravel the mystery of the Dourado.

Dane Maddock returns in another unforgettable adventure! When Maddock rescues beautiful archaeologist Jade Ihara, he joins her on asearch for the legendary Seven Cities of Cibola. Cibola takes the listener on a journey across the American southwest, where the ruins of the mysterious Anasazi hide deadly secrets, and foes lurk around every corner. Maddock and his partner "Bones" Bonebrake must decipher clues from the fabled Copper Scroll, outwit their enemies, and be the first to unlock the secret of Cibola.

Dane Maddock is back. Deep in the Amazon, a university group encounters a horror beyond their darkest nightmares and vanishes without a trace. Called upon to undertake a daring rescue mission, Maddock and Bones must trace the true path of Percy Fawcett's final expedition, but the secret that lies at the end of the search might be even deadlier than the enemies who seek it.