The Disaster Tourist by Yun Ko-eun (Narrated by Natalie Naudus) 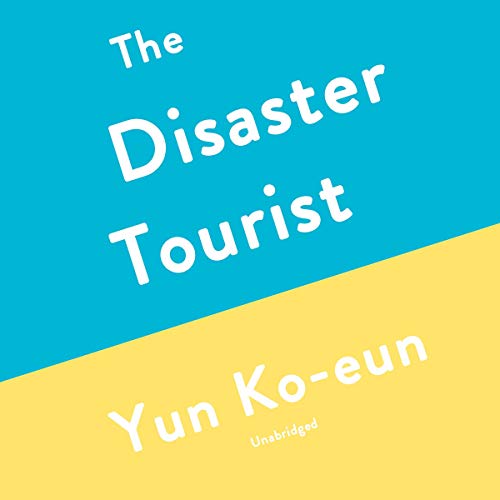 I can’t remember what drew me to this book in the first place but I’m glad that it did. Probably the opening sentence of the synopsis mentioning it was an eco-thriller. I was like, well I love those, let’s dive in. But little did I know it was going to be so much more.

Yun Ko-eun wrote such a beautiful book that covered so many different topics. From being in a “dead-end” job to what to do when you know something is going to go wrong but you can’t stop it. The Disaster Tourist surprised me around every corner.

The opening of the story revolved around Yona and her job. It was paced to be slower and really almost boring so that you felt as bored as Yona did. As things picked up, she’s sexually harassed at work by someone who is rumored to only do that to employees who are on their way out of the company (or at least those who are about to be demoted). She tries to bring it up to her superiors and then to other women who have been rumored to have been attacked by the same man – but doesn’t really get any where. Instead, the offer to send her on one of their trips so that she can audit it and let them know if it’s worth continuing.

Once she arrives on Mui things keep getting crazier and crazier. Once the tour is “over” the book really picks up (about the halfway point). I’m 100% okay with the pacing choices that Ko-eun chose for this – it really allowed for the book to follow the craziness. Once things picked up and the curtain was pulled back the story absolutely flew by.

Now, I’m not going to spoil anything, but the story kept surprising me as it drew towards its conclusion and the last part was an absolute sprint. I couldn’t put it down.

Overall, a really enjoyable book that I wasn’t sure how I was going to feel about until I got to the halfway point – after that I really enjoyed it (and in retrospect enjoyed the beginning as well as it set up the book nicely). The narration from Natalie Naudus was also great – really adding a “voice” to Yona’s character and bringing this book to life.

An eco-thriller with a fierce feminist sensibility, The Disaster Tourist engages with the global dialog around climate activism, dark tourism, and the #MeToo movement.

For 10 years, Yona has been stuck behind a desk as a coordinator for Jungle, a travel company specializing in vacation packages to destinations devastated by disaster and climate change. Her work life is uneventful until trouble arises in the form of a predatory colleague.

To forestall any disruption of business as usual, Jungle makes Yona a proposition: a paid “vacation” to the desert island of Mui. But Yona must pose as a tourist and assess whether Jungle should continue their partnership with the unprofitable destination.

Yona travels to the remote island, whose major attraction is an underwhelming sinkhole, a huge disappointment to the customers who’ve paid a premium. Soon Yona discovers the resort’s plan to fabricate a catastrophe in the interest of regaining their good standing with Jungle – and the manager enlists Yona’s help. Yona must choose between the callous company to whom she’s dedicated her life or the possibility of a fresh start in a powerful new position. As she begins to understand the cost of the manufactured disaster, Yona realizes that the lives of Mui’s citizens are in danger – and so is she.