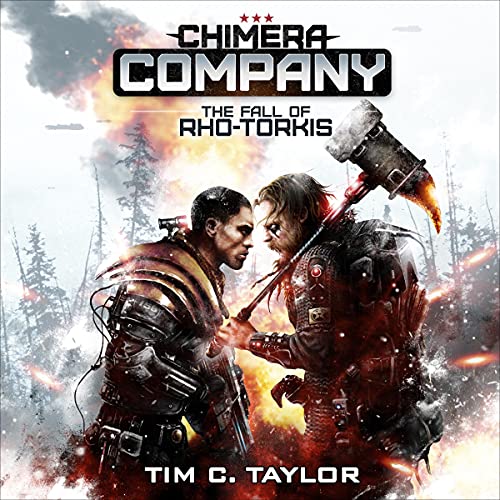 I’d heard about this book long before I picked it up. But I was surprised to see it didn’t have as many reviews as I expected for a book that jumped off of the page. This is my first book from author Tim C. Taylor but it will not be my last. He was able to hook me almost immediately and keep ahold of me throughout. It was a bit slow after the opening scenes but then picks right back up into the action and intrigue.

Chimera Company The Fall of Rho-Torkis was one of those books that both easy and hard to explain. Easy because when i describe it as a military sci-fi or a space opera – that covers most of it. Hard because it’s a hard book to pin down without spoiling it. I will say that even at 12+ hours – this one did leave me in a bit of a cliffhanger (at least not a “complete” story). But the arc inside of this one was good and interesting. Allowing me to get to know the characters and the world a little bit. Thankfully, I have the second book (also narrated by Campbell) queued up to listen, hopefully soon.

I think the thing that jumped out to me about this book was Taylor’s ability to write not just good characters, but good characters for this world. I think that’s under-represented in reviews. Sure, you can have an awesome character that really sticks out, but they might not fit the world they’re living in. Whereas the characters in The Fall of Rho-Torkis each character seemed to be placed perfectly and it really made me like each and every one of them for one reason or another.

Add in the great narration by Steve Campbell who allows Taylor’s words to come to life and you have a great book with great storytelling both inside the book and in the audiobook. I’m glad I took the dive into this one and I can’t wait to check out the second book of apparently at least five, Operation Redeal.

When your worst enemy has your back…you know the mission is doomed from the start.

Sergeant Osu Sybutu of the Legion had a simple mission. Take five men and travel unobserved to a location in the capital where he would deliver a coded phrase to a contact. Simple, that is, except for the fact that there was a war going on, and all the different factions he had to pass by on the way would cheerfully shoot him on sight. And that was only if the planet didn’t kill him first.

Militia Sergeant Vetch Arunsen’s task, however, was far more complex. Shepherd a group of hated rivals across the frozen wastes, keeping them safe from everyone who wanted to kill them, which was pretty much everyone. Including the oddball troopers under Arunsen’s own command, who would happily shoot the Legion soldiers if given the slightest opportunity.

Legion versus Militia. Joint defenders of the Federation. In theory. Their mutual loathing, however, could burn the armor plate off a battleship. For rival sergeants Sybutu and Arunsen, there’s only one way their squads could survive trekking across the ice world of Rho-Torkis.