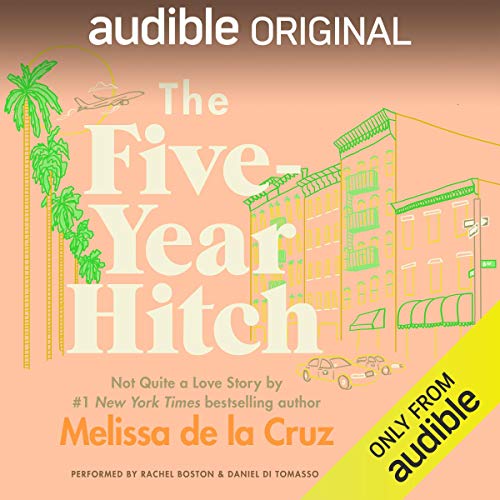 This was a really cute story that was written and performed more like a podcast than an audiobook and I have no problems with that. Numerous times during it they mentioned it being an interview for NPR, but it was quickly corrected to say it was being made for Audible, which I thought was an interesting and cute meta reference in the story.

The story itself is believable and really cute. Every five years something happens with these friends whether it’s one of them admitting they have a crush or someone getting married. It’s told from the now looking back on their past – reliving all of the different things that happened every five years. Which I thought was an interesting way to tell a story and jumps between the two main characters (and two narrators). They interrupted each other, talked over, and sometimes finished the other persons story just like a couple would in a situation like this. There were a lot of “no, I need to add more details” or “you tell it”, which if you’ve ever told a long story with a signifigant other, you’ll smile knowing that’s exactly how stories are told.

Overall, I thought that The Five-Year Hitch was a really cute love story… or as they call it a “not quite love story”. I won’t spoil any of the different things that happen over each five year period, but know that you root for them as the story progresses. You’ll laugh, you’ll cry, and you’ll be surprised.

When Harry Met Sally meets One Day, The Five-Year Hitch is the story of two friends who have known each other all their lives—falling in and out of love. Sam and Miles belong together, except every five years, there’s a hitch and they don’t end up together. Now, as they tell their story to a reporter at a momentous occasion, will they finally break the five-year curse? Can these two friends and lovers find their happily ever after?