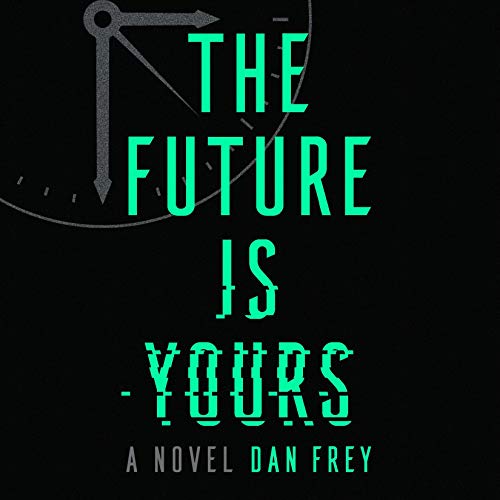 This is going to be a difficult one to pin down because I simultaneously liked it and had some trouble with it. So, I’ll try and be as honest as I can be without spoiling anything.

The Future Is Yours was told from a really interesting point of view. It bounces back and forth between a lot of characters, which doesn’t bother me. More so, it seems to be told from the point of view of different communication between and to the main characters. Some examples are, they are in a hearing, and it’s the recordings from those hearings that we hear. Or, it’s emails back and forth from the characters. The only time we really get an insight into the “inner mind” of any character is when they are writing an email draft that doesn’t get sent. Now, saying this, it’s a cool idea on paper, but the execution (yes, I think Frey pulled it off) left me wanting something else from the book. Every time I thought we were going to get some more info or some insight into something – it never came because it wasn’t part of the “public record” of the case.

Now, that out of the way, the premise of the story was fascinating. I thought that Frey did a good job giving us something that was unique and something I’ve never read about before. Sure, it’s a “time travel” book, but what travels through time is just the information. And honestly, when they were setting up the bylaws of how to use the devices – I’m surprised that Frey didn’t have one of the characters call out Biff from Back to the Future II and what happens when he knows all the sports scores (or in their case, stock prices). Instead, they just talked about how they would be found out by the SEC or the government in some way.

I also have to say that the ending was not what I expected. I don’t think I hated it and it didn’t leave a bad taste in my mouth, it was just completely unexpected. It’s been a few days and I still don’t know how I feel about it.

Overall, the full cast performance was great. A few times I think they could have removed some of the descriptors before the character started talking, but I’m sure others would have an issue with that. The story was interesting and seeing it’s in development into an HBO Max series – I’m intrigued. Because in TV, the things that bothered me about the book, I think I’d find interesting in a show.

Two best friends create a computer that can predict the future. But what they can’t predict is how it will tear their friendship – and society – apart.

In development as an HBO Max Original Series

If you had the chance to look one year into the future, would you?

For Ben Boyce and Adhi Chaudry, the answer is unequivocally yes. And they’re betting everything that you’ll say yes, too. Welcome to The Future: a computer that connects to the internet one year from now, so you can see who you’ll be dating, where you’ll be working, even whether or not you’ll be alive in the year to come. By forming a start-up to deliver this revolutionary technology to the world, Ben and Adhi have made their wildest, most impossible dream a reality. Once Silicon Valley outsiders, they’re now its hottest commodity.

The device can predict everything perfectly – from stock-market spikes and sports scores to political scandals and corporate takeovers – allowing them to chase down success and fame while staying one step ahead of the competition. But the future their device foretells is not the bright one they imagined.

Ambition. Greed. Jealousy. And, perhaps, an apocalypse. The question is…can they stop it?

Told through emails, texts, transcripts, and blog posts, this bleeding-edge tech thriller chronicles the costs of innovation and asks how far you’d go to protect the ones you love – even from themselves.