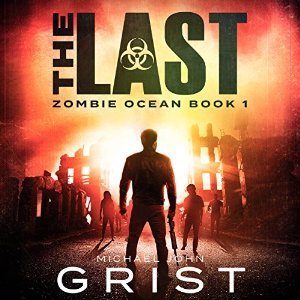 Gritty, real, and a total surprise

I’ve read a lot of post-apocalyptic “zombie” novels.  A lot of them follow the same cadence.  Most of them even follow almost the exact same script.  The Last couldn’t have been more different.  The first part of the book isn’t even about the apocalypse, it was about Amo’s life trying to get used to daily ticks and issues related to a coma that he was in.  I honestly would have read a book just about Amo and his everyday dealings.

Because Amo was so well written and explained, he will probably be one of the most memorable main characters I’ll read for a while.  He was just so likable in a raw and flawed way.  He’s broke in so many ways, so it was easy to relate to him no matter how you grew up or what’s happened to you in life.

The story itself could have been a few shorter books that I would have gobbled up after reading the intro.  I couldn’t believe the amount of story that Grist was able to pack into The Last.  Amo’s backstory, Amo’s coffee shop experiences, Amo’s first days of survival, Amo’s killing fields, Amo’s trip and realization, Lara’s escape… I could go on and on.  There were so many mini-plots going on that I would eat the pages up.

The next sentence could be perceived as a spoiler, and I’m going to try my hardest to not spoil it completely.  Even Amo’s realization and subsequent interactions made this book totally different than any other zombie post-apocalyptic book I’ve ever read.  That in itself made this book totally unique in this genre.

Overall, if you’ve read this far, you can tell that I loved The Last by Michael John Grist.  I looked up the series to see if there were more and was quickly surprised to find that there are 6 or 7 books.  But series-haters — you can just read this book and be happy.  Another thing that can’t be said about a lot of books in this genre.  Grist actually writes a full story arc with a conclusion and everything.

When the zombie apocalypse hits America, not a soul is left alive.

Except Amo. He's a comic book artist. He's a video game world builder. He's just a regular guy living in New York City, with only his wits, creativity, and basic decency to guide him.

He's alone against Seven billion zombies. Will he survive?

'Robinson Crusoe' meets the zombie apocalypse like you've never seen it before, packed with adventure, gore, and a mind-blowing twist. A tale of post-apocalyptic, zombie survival action that kicks off the Zombie Ocean series, continued in Book 2, The Lost. Burning questions will be raised and answered, like:
* How do you survive when the whole world wants to eat you?
* Where does hope come from when you're the last one alive?
* Where are all the zombies going, and what on earth do they really want?
* Would you survive? Measure yourself against Amo - scroll up and get your copy now.


If you like apocalyptic stories like I Am Legend, The Girl with All the Gifts, or The Walking Dead you will love this book.

Michael John Grist is a real-world ruins explorer and best-selling author of ‘The Last’ zombie series. For 11 years he lived in Tokyo, Japan, where he photographed abandoned places like ghost towns, forgotten military bases, and deserted theme parks. Now he lives in London, England with his wife and two cats. Sign up to Michael’s New Release email list and you’ll automatically get notified as soon as his next book is released: http://www.michaeljohngrist.com