The Prize: Tales From A Revolution: Vermont by Lars D.H. Hedbor (Narrated by Shamaan Casey) 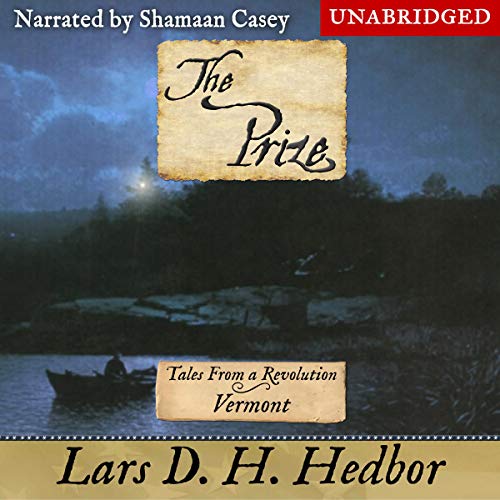 As with all the other books in this series that I’ve checked out – this one was another great piece of historical fiction. Hedbor is able to write these stories and instantly transport the reader to the time and place that they’re taking part. Within the first few paragraphs the reader feels like they are there with these characters and they are living in the moment with them. It’s fascinating.

The Prize was another interesting one – and just like the other books, was a piece of history that I knew nothing or little to nothing about. I really enjoy that Hedbor is able to describe pieces of history that feel like they need to be told. He did it again with this one.

Similar to what I mentioned above is Hedbor’s ability to capture the moment in time just right. The language and way that people speak also feels dead on and it has in ever book I’ve read by him.

And, of course, you can’t talk about an enjoyable Hedbor novel without talking about his long-time narrator Shamaan Casey. He’s been the voice of each of the titles that I’ve read and I’m glad that I get to continue listening to his amazing voice tell these great stories.

The biggest heroes are sometimes unsung

Caleb’s father is serving with Ethan Allen’s Green Mountain Boys as the long-anticipated open war against the British rages up and down the length of Lake Champlain. Between his duties on the family farm and constant worry about his father’s safety, the young man’s attentions are already fully occupied when a fateful encounter with an unlikely neighbor changes everything. Pulled into new intrigues and new friendships, Caleb finds himself on a path that changes his life – and which will affect the outcome of the whole war.

The Prize is the Vermont volume in the Tales From a Revolution series, in which each standalone novel explores how the American War of Independence unfolds across a different colony or future state. If you like stories such as The Deerslayer, or you’ve ever wondered how the Revolution affected the lives of ordinary people in out-of-the-way corners of America, you’ll love The Prize.

Listen to The Prize today and see how the American Revolution touched people in every corner of the colonies!