The Shadow Order by Michael Robertson (Narrated by Brian Dullaghan) 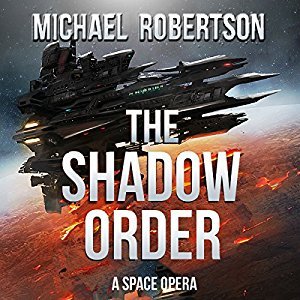 A Sci-Fi Mystery Thriller, if that’s a thing

I can tell you this honestly, I didn’t expect the ending that this book had.  It’s not that I didn’t see it coming, I should have the entire time — but I really didn’t.  I didn’t read much of the synopsis before buying this.  I knew of Michael Robertson from other series and other books in my TBR pile.  I saw the price (free for kindle) and the price for the audiobook (I believe it was $1.99) can’t be beat.  I picked it up quickly and dove into it just as fast.

The Shadow Order is about second chances.  Sometimes we don’t get the ones we think we deserve and other times we feel like we’re given a second chance with almost no reason.  Seb is a very likable character in a very unlikeable way.  He’s hated by almost everyone he comes across, even his own father is starting to dislike him a little bit, or at least disliking who he’s becoming.

The story itself was short and concise.  Really to the point (and the point was to get to the next story I believe).  A lot of times when an author does that — it makes the “prequel” or the intro book boring and unreadable.  Robertson definitely writes an interesting and fun tale.

If you’re a science fiction fan, there are tons of races, back story, and overall planet jumping here for you.  If you like old school mysteries, Seb tries to solve a mystery himself.  And if you’re a thriller fan — this book has a lot of elements reminiscent of a lot of the good thrillers I’ve read. So, there’s something for a lot of readers here.  There are even a few heartwarming moments that will lift your heart if you’re feeling down.

Overall, The Shadow Order was an unexpectedly good book.  I say that with the most honest intentions.  I really didn’t know what to expect, and I ended up enjoying it.  I will definitely be checking out the next book in this series.

Seb Zodo lives on the dusty planet of Danu. He's an unemployed dropout who makes his money fighting in bars and taking a cut of the winnings from the touts.

Having never lost a fight, Seb is addicted to the adrenaline of the duel. So when he makes a promise to leave brawling behind, his world's turned on its head. Especially when he finds himself with no money on a hostile planet where the fighting pits offer more than Seb has ever won before. With no way out, Seb must decide whether to fight or not. Every decision he makes with his fists seems to throw his life into deeper chaos, but he's already hit rock bottom.

With the smell of blood and sweat from the fighting pits in his nostrils, Seb watches the current champion. The hairs on the back of his neck raise. He can win. He can claim the purse.

But, if he steps into the ring, it won't end with the last punch. If Seb fights again, he knows his life will spiral out of control.

The Shadow Order is a fast-paced, planet-hopping, space opera adventure.

Michael Robertson is a writer of many stories. He predominantly writes science fiction with a darker edge to it.

Since his late teens, Michael has written stories of all kinds and finally started publishing in 2013 after having a short story accepted by HarperCollins.

He hopes for each story to be better than the previous one and wakes up grateful every day for his growing audience.

A father of two young children, them and his partner make everything worthwhile.