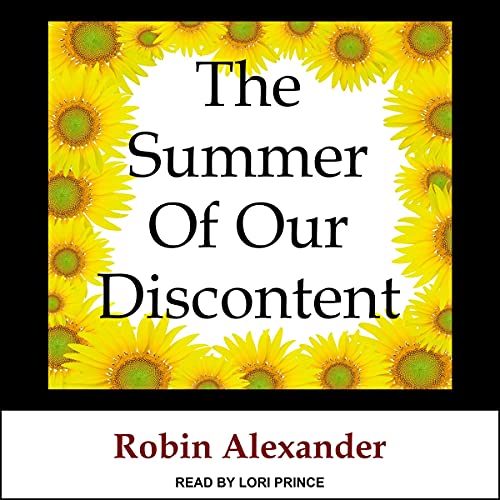 I can’t even complain when a book that’s this cute goes exactly how you think it’s going to from the very opening chapters. The Summer of Our Discontent was one of those books that even if it was predictable – was completely overcome by such enjoyable and funny writing from Alexander. Robin was able to create two main characters that had a long history – an especially long one of “hating” each other – aka being uber-competitive at everything and always fighting over stuff.

The Summer of Our Discontent has a title drop near the end of the story, I was trying to figure out why Alexander called it that – but I thought it was cute and ended up being a great tagline for the book. I also wasn’t sure why the cover had sunflowers in it – but that’s explained away as well.

Faith and Rachel were both great as the leads in this. Each one of them had a way of going about things that bothered the other, but at the end of it all, they were trying to accomplish the same thing. Throw in the cute kids (one daughter and one niece who are also best friends) and sparks are bound to fly. Instead of sparks, fights erupt. But they’re put in their place by a VERY bubbly camp counselor and from that point on the story is pure downhill enjoyment.

I’ve mentioned before my love for a Lori Prince narrated novel – and I’d be lying if I didn’t say that I picked it up just because of that. I know that there hasn’t been a story she’s narrated that I didn’t like – and Summer kept that going. She provides a great backbone to an already great, light, and funny story. When I say funny, I mean it too, there were scenes (see the domestic scene, especially the chase).

Faith Leblanc is looking for that special someone, but her tactics have branded her somewhat of a womanizer. A few doors down, Rachel Chauvin is looking for the same, but her conservative style hasn’t yielded any keepers, either. Neither woman is willing to consider the other as a prospective partner, mostly because they’ve hated each other for nearly four decades.

Change is in the air, and spring is giving way to The Summer of Our Discontent.