They Feed by Jason Parent (Narrated by Joe Hempel) 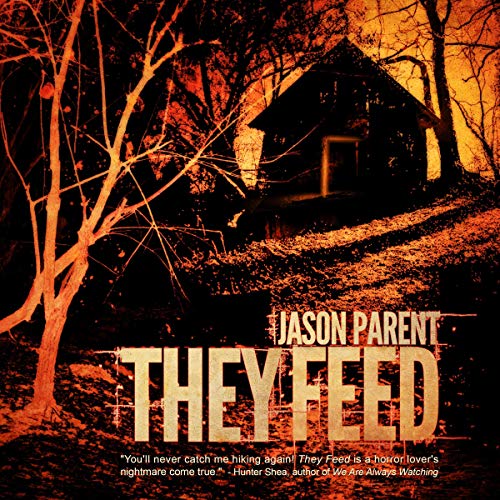 I haven’t read a book in basically one sitting in a long time. They Feed sucked me in and wouldn’t let me go. I started listening while doing some editing on my blog earlier in the day – and I ended up sitting down in the evening because I couldn’t get it out of my head. It was like the monsters in the book were real and they were calling to me.

The beginning of They Feed reminded me a bit of another book that I’m currently listening to that Joe Hempel narrated – but it pretty quickly diverged and became its own monster horror story. The first half of the book was setting up the characters, the setting, and slightly into what horrors would come.

Just know that after reading They Feed, I’m going to have a hard time going into the woods near dark anymore.  It scared me in one of those “I’m going to think about this all the time” ways.  It wasn’t full of jump scares or cliched banter – it was just a tour-de-force mental scare. Parent was able to pull this off without giving away what was actually causing the issue until near the very end of the book.

Without giving it away I’m going to mention a line about the final reveal.  Good lord, I did not see that coming.  Not. At. All. Parent, while scaring me half to death throughout the book and taking me on an emotional roller coaster came out with a final haymaker to absolutely knock me off my feet with that final reveal.

Overall, a great horror novel narrated perfectly by Joe Hempel.  A book that I was excited for when I saw the original cover reveal only to be bummed that the audiobook wasn’t slated for any time near the ebook release.  I was then re-excited when I saw that the voice of horror – Joe Hempel was chosen to narrate it.  I wasn’t let down at all from any of my enthusiasm. I’ll be looking for more horror stories from Parent (hopefully narrated by Hempel).

The night uncovers all we wish not to see.

A troubled man enters a dusky park before sunset. A young woman follows, hidden in shadow. Both have returned to the park to take back something the past has stolen from them, to make right six long years of suffering, and to find justice or perhaps redemption—or maybe they'll settle for some old-fashioned revenge.

But something evil is alive and awake in those woods, creatures that care nothing for human motivations. They’re driven by their own insatiable need: a ravenous, bottomless hunger.

The campgrounds are full tonight, and the creatures are starving. Before the night is over, they will feed.

An unrelenting tale of terror from Jason Parent, acclaimed author of People of the Sun and What Hides Within.

Also by this author: Seeing Evil, Where Wolves Run

Audiobook: Horror in the Woods by Lee Mo