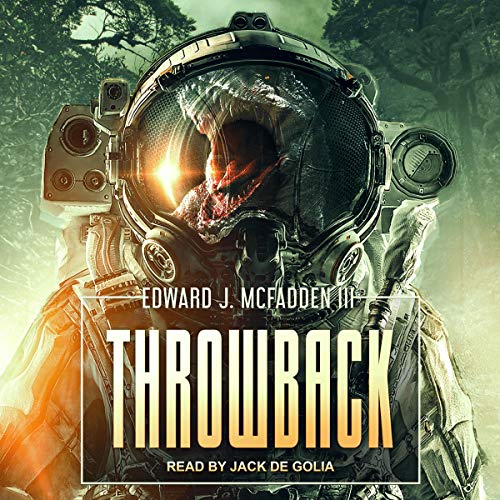 First and foremost – McFadden does not shy away from action.  We’re given basically a chapter to realize that Earth has a giant cloud about to cover it. In the next chapter we realize what has happened to the crew. The action started right away and didn’t let up until the very end.

McFadden was able to write an interesting story that I didn’t see coming.  He wrote a book that felt familiar but also completely different.  It had the feel of Land of the Lost combined with other “lost in space” type books. The crew of the ISS is taken what they assume is back in time, but once they arrive here, there are eerie and interesting artifacts that they didn’t expect.

The crew (two astronauts and one cosmonaut) set in motion a search for the mysterious beacon and along the way they are face to face with predators that have been extinct for millions of years.

The story itself flew by because of all the action.  When McFadden slowed it down to have more heart-to-heart moment it wasn’t as perfect.  It just felt a little clunky and not as well-paced as the action. I thought that utilizing the native language version of “yes” for the different people was a nice touch and added to the story instead of taking away like another reviewer suggested.

Overall, an interesting time travel/space/dino thriller story with both and old and new feeling to it.

A space cloud of unknown composition is on a collision course with Earth as the world holds its breath.

The anomaly sails through the solar system, and the International Space Station, along with three astronauts and one cosmonaut, are thrown back to the Cretaceous period, where dinosaurs roam Earth hunting prey and great pterosaurs patrol the skies.

Supplies on the station run low and desperation takes hold, but morale grows when the crew sees a bright multi-colored light blinking on the surface below. The astronauts decide to evacuate the station in the Soyuz escape capsule and investigate. As the adventurers struggle to survive in the primordial jungle, the party discovers artifacts of an ancient civilization that could help them find the light beacon. If they can stay alive long enough.