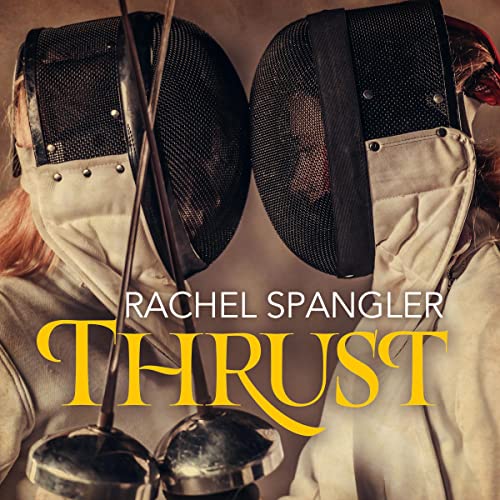 From Buffalo With Love

If you’d told me I was going to enjoy a romance set between two fencers I would have been confused and probably told you that you’re crazy. But… here we are. I actually picked this one up because I enjoyed the last story (Fire & Ice) I read by Spangler so much that I had to pick another one up. The last one was about another “obscure” sport – curling. But this one was even more obscure to me since I know very little about it.

Thrust was one of those books that just jumped off of the page right from the first “en garde”. Spangler started this story when the main characters were kids and there was a promise made. Fast forward some years and things have gone similar to how one person expected and not how the other one did at all.

Spangler throws each character for a loop and allows both of them to be vulnerable with each other and also able to teach each other in different ways. I loved the give and take that each one of them had. I also like that the “drama” that most of this genre has was pretty mild in this one (unless you count the drama of the years between the opening and the first meeting).

I also love when my hometown is shown off in books. Spangler being from here is able to do it in such a nice way. I loved the “digs” saying “but she’s from Buffalo” because I’ve heard them all before. I love that rust-belt “go ahead and doubt us, we’ll prove you wrong” attitude that people from Buffalo have – and this is on full display in this book.

Fencing prodigy Jess Kidman has always been ahead of her peers. At the age of 13, she made the varsity team, won a state championship, came out, and fell head over heels in love with her team captain, Lauren Standish. After being gently rebuffed by the high school senior, young Jess vowed she would return for her some day when their age difference became irrelevant and her own accomplishments made her not merely an equal, but an Olympian. Ten years later, Jess makes good on her promise, but when she arrives back in Buffalo a few months before the big games, she’s intrigued to find that the woman she’s always dreamed of could also be exactly the coach she needs to win gold.

Lauren, however, isn’t the bubbly team captain she’d been at 18. After a stellar collegiate career of her own, circumstances forced her to put her dreams on the shelf and return to Buffalo. She’d made peace with a quiet life spent running a Rust Belt fencing club and coaching kids when Team USA’s hottest young fencer waltzes back into her life. As much as Lauren finds Jess’ confidence and athleticism alluring, she also sees the hotheaded superstar as a threat to the carefully controlled world rebuilt in the wake of the traumatic loss she is desperate to avoid reliving. Never one to turn her back on a friend in need, Lauren agrees to coach Jess on the condition that they focus only on the swordplay and not the sharp point of attraction threatening to sever the bonds of her professionalism.

The two women set to work preparing for the biggest event, but as tension mounts in the lead-up to the Olympic Games, the pressure and the passion building between them also grows, leaving both to wonder if Jess is trying to win the gold, or win the girl.

No Strings by Lucy Bexley (Narrated by A