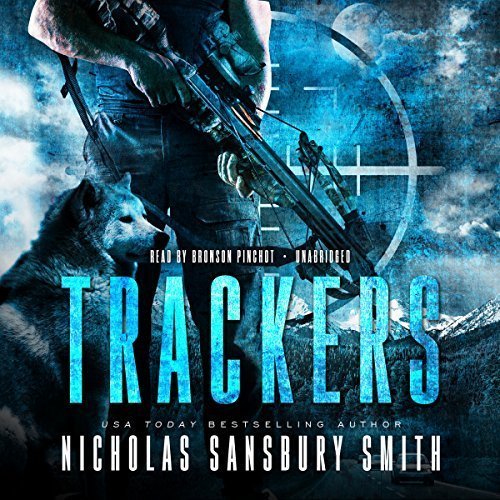 Trackers is a book (and a series) set in a world where North Korea has taken down most of the United States with a “perfectly strategized” atomic bomb attack – high in the atmosphere – aka setting off an EMP. It is also a book about a serial killer.  That makes this one of the most unique books I’ve read in… well either genre. That’s what, in my opinion, made this one such a great story.

It wasn’t just another EMP/Post-Apocalyptic book where everything seems to work out for the good guys and all the bad guys seem to just do things with no good reason.  Smith was able to write a story that was both believable but downright terrifying. Either one of the two stories that are interwoven would have scared me, but the combination of the two is what really got to me.

The lead up to and the eventual attack by NK feels like it is torn right out of the headlines.  Smith does a fantastic job writing Political Fiction without actually making it too political. I love that there were good and bad guys in the political part of the story – but we never hear or find out what side of the fence they sit on.  We’re able to pick and choose what we want to believe and then color the story our way.  It’s a gutsy move as an author, but I think it absolutely pays off.

The serial killer/Native American folklore part of Trackers is what really sets this book apart from others in this genre. Smith was able to make a believable serial killer and one who was able to torment and terrify the townspeople of Estes Park. Really talking much more about this part of the book would spoil it, so just know you’re in for a totally unique twist.

Raven is easily one of the most unique and interesting characters I’ve ever read.  Smith does a great job including some Native American lore along with what people living on reservations would deal with (especially “half-blood’s” like Raven). He was a “troubled” kind of guy who had gotten in trouble with the police but ends up helping them out numerous times.

Okay, so the only reason that this book lost .5. And if you’re reading this on any of the major sites (Audible, Goodreads, Amazon, etc.) it will get the 5 it deserves.  Bronson Pinchot’s narration rubbed me the wrong way a few times.  It was just times where a sentence would start off like this AND THEN GO INTO SOMEONE YELLING LIKE THIS (all while kinda sounding like you’re passing a kidney stone – aka through gritted teeth). It’s hard to describe and I almost feel guilty for pointing it out. But, the overall narration and feel of this book were uneasy – and that was done on purpose.  The world is almost ending and people are being attacked by a serial killer. It’s an uneasy book.

Overall, a great start to a series that I’m definitely interested to see how it continues.  I’m really intrigued by where Smith will take us next!

The end of the world is just the beginning of the hunt....

Estes Park police chief Marcus Colton and tracker Sam "Raven" Spears have never liked one another, but when a young girl goes missing in Rocky Mountain National Park, Colton hires Spears to help find her. Their search ends after a night of devastating horror. When word reaches Estes that the nation has been hit by a coordinated electromagnetic pulse attack, Colton and Spears are forced to work together again. But they quickly realize they aren't just tracking a killer - they are tracking a madman. As the United States descends into chaos, the hunters become the hunted.

Halfway across the country, Senator Charlize Montgomery awakes to find the nation's capital has gone dark. Forced to set off on foot, she treks across a city that has woken to a new world, and as the night progresses she learns the EMP attack was just the beginning.