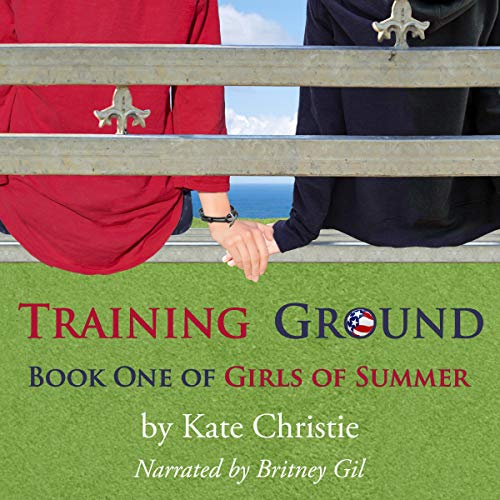 Cute and Deals With Some Deep Stuff Well

I’ve had my eye on Training Ground for quite some time. I though that the premise was cute and that it was going to be an interesting story. What I was not prepared for was the amount of things that each girl goes through and the topics that Christie was going to cover (not that I’m complaining, more on that in a moment).

Easily, one of my favorite parts of Training Ground was the time period it was set it. I was a senior in high school when this book was set (aging myself here… 2003) – so the different things that the girls did, talked about, and used were all right at home when I go back to that age in my head. There was calling on the land line, and just calling in general (not much texting since you paid by the text message). There was some medical marijuana use for the one who lived in California (I didn’t realize it at the time, but it was passed in 1996). It definitely made relating to the characters easier for me, but if you didn’t go to school then, instead of nostalgic, you’ll just look back and laugh at all the stuff we had to deal with.

Now, back to the things that Training Ground covered. I don’t want to spoil any of the different things, both of the main things that this book covers are main turning points for it, but just know that you’re in for some deep topics. The more “usual” (I hate saying that) one was the hatred, name-calling, and overall confusion that everyone had around being homosexual in 2003 was there, but there are 2 other deep topics (one for each girl) that they go through. I thought that Christie nailed them and really used each topic to dive into how each person felt but also to drive who they were as women.

Overall, Training Ground was great. I really enjoyed it. The biggest/only complaint that I really have was that it just ended. I mean, I think had I realized it was coming I might have understood, but all of a sudden I thought “wait, it’s over?”. So, thankfully I have the next book to read and I hope it deals with the same women with the next part of their lives, but I haven’t looked at the time of writing this.

Sometimes a chance meeting can change everything.

At 15, Jamie Maxwell’s main goals in life are to make the United States youth national soccer pool, move past the Incident-That-Shall-Not-Be-Named, and maybe – someday – kiss a girl. When she meets Emma Blakeley at a tournament in Southern California, something about the older girl draws her in. And it isn’t that she expects to ever get the chance to kiss Emma. Really.

When Jamie invites her to sneak out on the last night of Surf Cup, Emma doesn’t go because she likes Jamie’s smile. She goes because, as the daughter of a surgeon and a nurse, she has a genetic predisposition to try to heal people. And Jamie, she can tell, is wounded.

Neither girl suspects that this first last night together will form the basis of a bond that will last across years and miles, from SoCal soccer fields and New York hotels to Portuguese beaches and the streets of Vancouver. But that’s how most friendships begin, isn’t it? With a smile and a nod and the courage to ask, “Do you maybe, possibly, want to come with me”?

Romancing the Kicker by Catherine Lane (