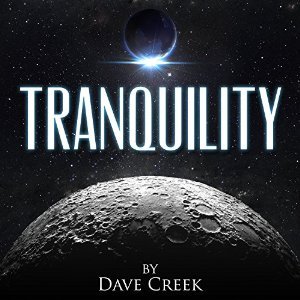 How far would you go to avenge your parent’s deaths?  For 14-year old Dacia, it would drive the next 10+ years of her life.  After watching her parents die in an explosion, she vows to avenge their deaths by finding and killing their killer.

The narration for Tranquility was done by Kristin James who does a pretty nice job.  The range wasn’t all there (a few times she tried to be other characters that just sounded weird and forced).  Other than that she had a really great narration voice, and I found it really easy to listen to.

The story was one of vengeance.  It was like an old school detective story mixed in with a modern day thriller.  Dacia as a character felt very one-dimensional, but that is most likely due to the fact that for most of the story her emotions are “muted.”

The scenes that Dave Creek painted were both that of familiarity (the lunar landing site) and brand new areas.  I thought he did a really nice job weaving in things that we would recognize with new things that only a science fiction book would hold.

The science in the book (there wasn’t too much) was believable and a little out there (it is sci-fi).  And I thought that overall, Tranquility was an enjoyable book.  The length felt just right to me, and I’m really glad that I took the time to read it.

This book was given to me at no charge, in exchange for an unbiased review via Audiobook Boom

An explosion in Tranquility City on the moon kills 14-year-old Dacia Stark’s parents and sends her on a quest to find Julian Walker, the terrorist who admitted to the crime. Now a detective on Tranquility’s police force, Dacia has seen more than her share of blood, death, and grief. But that’s only stiffened her resolve – not just to track Walker down, but to kill him. Dave Creek is a regular contributor to ANALOG SCIENCE FICTION AND FACT. His books include two short story collections — A GLIMPSE OF SPLENDOR, and THE HUMAN EQUATIONS — and a novel, SOME DISTANT SHORE. His most recent work is THE SILENT SENTINELS, a novella.

Find out more about Dave’s work at www.davecreek.net and on Facebook at Fans of Dave Creek.

In the “real world,” Dave is a retired television news producer.