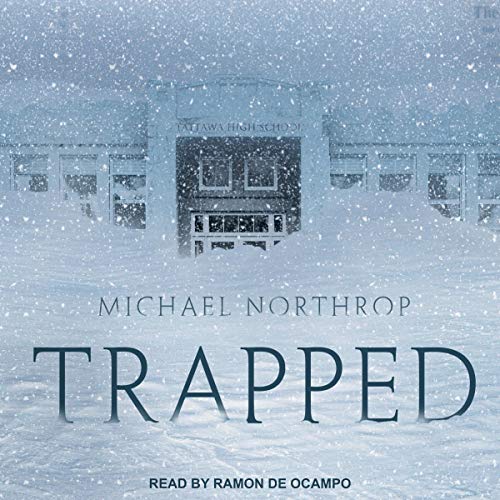 A YA Book Written For Actual Young Adults

Trapped might be one of the harder books I’ve ever had to rate because it was a good book from beginning to end but not much happened. The entire story revolves around a group of teenagers who are left unsupervised in their High School during an absolutely insane Noreaster that just dumps snow on them.

The snow/weather part of this was absolutely my favorite part – Northrop did a pretty good job explaining it.  He even compared the snow to Buffalo (where I live) a few times since these characters were not used to getting a lot of snow.  But around 6 feet at one time was enough for us – the students in Trapped saw much more.

I believe I saw in the tagline that it was similar to a couple of movies (like The Breakfast Club) and I can see that… a little.  Trapped really is a modern young adult book written for that exact demographic.  There is some talk about first crushes, bullies, wanting to be cool, acting cool, and just the overall “growing up” theme.  There was some survival talk, but all-in-all they were pretty safe – a big school – with a cafeteria to boot allowed them to survive without starving.

Overall, a YA book that was written for a YA crowd.  There was nothing wrong with this book but I felt like it missed on a few levels as well. I did finish it in two days – so it definitely held my attention.

The day the blizzard started, no one knew that it was going to keep snowing for a week. That for those in its path, it would become not just a matter of keeping warm, but of staying alive . . .

Scotty and his friends Pete and Jason are among the last seven kids at their high school waiting to get picked up that day, and they soon realize that no one is coming for them. Still, it doesn't seem so bad to spend the night at school, especially when distractingly hot Krista and Julie are sleeping just down the hall. But then the power goes out, then the heat. The pipes freeze, and the roof shudders. As the days add up, the snow piles higher, and the empty halls grow colder and darker, the mounting pressure forces a devastating decision.

The Rift In Our Reality by Amy Proebstel