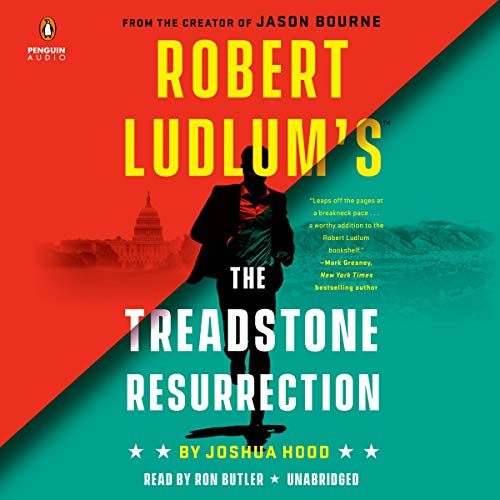 I went into this book with high hopes. It’s not that it let me down, because it didn’t – it just wasn’t the book I was expecting. Now, saying that, it’s still very much like the movies and honestly could easily be a movie in this saga. Joshua Hood definitely breathed some new life into an older story line. And definitely made the main character Adam Hayes Bourne-like in a lot of ways.

The Treadstone Resurrection re-uses a lot of the stuff that fans have fallen in love with like lots of guns and gun fights. Running into battle instead of away from it. Shadowy governments. And obviously the Treadstone program. Hayes as I mentioned earlier is obviously very Bourne-like (same program) but there was some more talking to the voice inside of his head in this book than in the movies (I cannot speak to the Bourne books, I have not read them). I thought that little voice (usually reserved for fight or flight circumstances for a normal human) was an interesting character if he could be one. Hayes talks to him enough that I think he is one.

The parts that I didn’t like where that at times it felt like it was hard to tell who was talking/the focus. It jumped around a bit and maybe it’s my own fault for listening while doing household tasks – but a few times I was like wait is this Hayes or someone else? I think that it was probably written in a way that helped point that out – but the narration left just a little to be desired there.

Overall though, this was a fast-paced Thriller for those who love other books and movies in this series and genre – it’s a definite win for you. Hayes was thrown into situation after situation that felt like he was never going to make it out alive. I won’t spoil it, but the ending was extremely satisfying – especially after everything that happened throughout the rest of the story. It was a nice payoff for reading the entire book.

I liked that it was a complete story as well. You could tell that Hood plans to leave this series open – but it also felt good to finish a book and be done with it. It’s not that I don’t crave another book in this series – I’m just not upset that I probably have to wait a year to get another one.

The first novel in an explosive new series inspired by Robert Ludlum’s Bourne universe, The Treadstone Resurrection introduces an unforgettable hero and the shadowy world that forged him….

Treadstone made Jason Bourne an unstoppable force, but he’s not the only one.

Operation Treadstone has nearly ruined Adam Hayes. The top-secret CIA Black Ops program trained him to be an all but invincible assassin, but it also cost him his family and any chance at a normal life. Which is why he was determined to get out. Working as a carpenter in rural Washington state, Adam thinks he has left Treadstone in the past, until he receives a mysterious email from a former colleague, and soon after is attacked by an unknown hit team at his job site. Adam must regain the skills that Treadstone taught him – lightning reflexes and a cold conscience – in order to discover who the would-be killers are and why they have come after him now.

Are his pursuers enemies from a long-ago mission? Rival intelligence agents? Or, perhaps, forces inside Treadstone? His search will unearth secrets in the highest levels of government and pull him back into the shadowy world he worked so hard to forget.