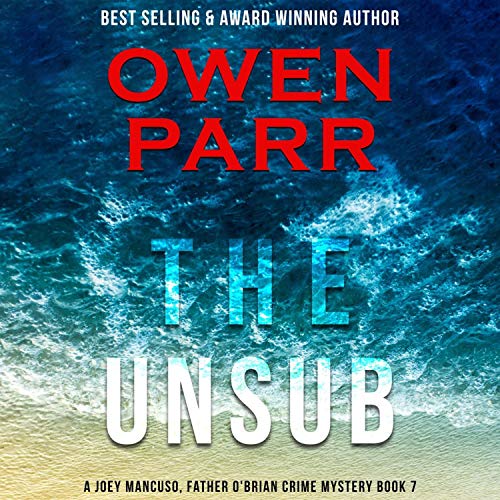 The Unsub is the seventh book in the Joey Mancuso & Father O’Brian Crime Mysteries series – a series that I absolutely love. Mancuso loves and sort of emulates Sherlock Holmes in the way that he approaches each different crime he’s send to investigate. So, each of these stories have that old-school feel without feeling old.

This is the first Mancuso book that I feel like you didn’t need a ton of backstory to follow or understand. I think that this one could be picked up by someone who hasn’t read the others and they wouldn’t be lost. A few of the themes that run through the other stories (loving Sherlock Holmes and things like that) come up and aren’t fully explained, but I don’t think that would confuse a new reader.

Like with other Parr novels, The Unsub sees Joey and team taking on the fight for someone who wouldn’t have been fought for. This time it wasn’t necessarily an “underdog” like in their other adventures but it was still someone that was going to ignored if they didn’t pick up the investigation. I thought it was even more interesting because Parr throws in multiple cases and even takes a couple 90 and 180-degree turns once things feel like they’re starting to be buttoned up.

The story was fascinating and definitely enjoyable. I love the way that Mancuso attacks his cases and the way that as things fall into place, me as the reader feels like they are accomplishing as much as Mancuso is. It’s great when a story can be written in a way that makes the reader feel so invested.

Randy McCarten does a good job with this book, but there were a few parts that I would have improved if I could. One of the most difficult things to do in an audiobook is change between characters. The jump, which is super obvious on the written page, isn’t always easy to describe or explain in an audiobook. Since The Unsub seemed to jump between Joey and the his author friend turned undercover investigator this became a problem if I was in the moment and not listening for the switch. I don’t even mind if McCarten didn’t change voices between the characters (though that’s the easiest way to make it stand out) – but there needed to be more than a “chapter 9, Joey Mancuso” between the switches. I don’t know how, but sometimes some music (the same music every time the Joey is on and different music when the other…?) Switching voices probably would have been a little easier. I thought that McCarten did a great job taking over this series and even keeping Joey’s voice similar. But if he’d changed it a bit for the other character it probably would have made this book slightly easier to follow.

He was just an ordinary guy – so why was he quietly whacked?

In his seventh hard-boiled tale, New York-based Private Eye Joey Mancuso travels to the lush, verdant shores of Miami Beach. But this is no vacation – Joey’s wading knee deep into a gritty cesspool of corruption, using his street smarts and industry connections to investigate a vast financial conspiracy.

A young hedge-fund employee – a kid right out of college, green as can be – was killed by an anonymous sedan while on a motorcycle ride after hitting the South Beach clubs. Miami Beach police don’t seem interested, but Joey does – the kid’s dad is a friend of a friend. And Joey Mancuso is nothing if not a loyal friend. So Joey and Marcy, his gun-toting FBI agent wife, hole up on a boat in Miami Beach, hell-bent on figuring out how an entry-level employee could provoke such tragedy.

Soon, Joey and Marcy call in a favor of their own: They ask an old friend with Wall Street experience to play undercover agent at the fishy hedge fund. Joey’s ragtag team quickly uncovers a dirty trail of wealth and greed – a big, fat, Eastern European crime syndicate that stretches from Miami Beach back to their new stomping grounds in New York.

Returning to their beloved, bustling, Lower Manhattan bar, they team back up with Joey’s brother and PI partner, the quick-thinking Father O’Brian. But New York is the bad guys’ home turf, too – suspects are becoming victims, and these villains are plenty adept at slipping around the shadows of the city, intent on murdering anyone who tries to mess with their money. Before you can say “Czech mob”, Joey and Father O’Brian find themselves trying to stay one jump ahead of this deadly organization.