Audiobook: Until Nothing Remains by C.A. Rudolph (Narrated by Kevin Pierce) 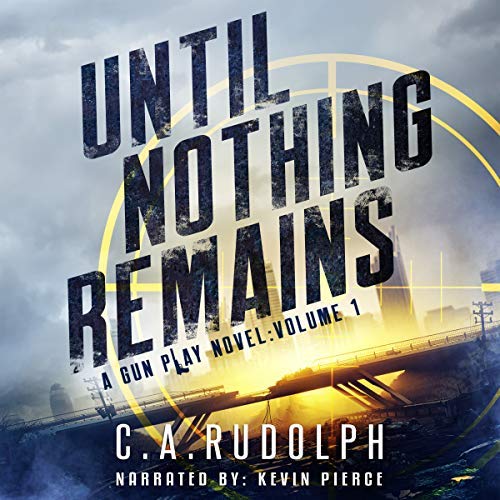 I wasn’t sure what I was getting into when I started this Until Nothing Remains, especially because it’s dubbed “A Hybrid Post-Apocalyptic Espionage Adventure”. Rudolph was able to tell a story that felt new and a little unique in the genre.  It was either a thriller that had some post-apocalyptic spin to it or a post-apocalyptic story with a thriller/assassin vibe to it. Which, is pretty new to me.

The book was split into two basic parties. One is a family of six (and a dad who is a bit of a prepper) and the other being a husband and wife assassin team. The family of six included one of the funniest characters I’ve read in a PA book, Violet.  Rudolph was able to capture that smartass teenage girl who also had kind of a heart of gold.  She was the most memorable character in my eyes. Each person in the family seemed to have their own part and was written in a way that I enjoyed.

The husband and wife team were an interesting wrench into the story.  They had their place and were basically half (if not slightly more) of the story and I can’t talk too much about them.  Thankfully Rudolph at one point mentions that they were similar to a Mr. and Mrs. Smith (post finding out what their day jobs were of course) because I wanted to mention it.  It felt a lot like that in a good way.

Overall, I thought that Until Nothing Remains was an interesting take on the genre (either one) and that it had some fresh feel to it.  Throw in Kevin Pierce’s voice and you have a winner in my book.

This review was a lot harder to write due to all the spoilers that I could have brought up.  It might come off a bit choppy and weird feeling but every time I would try and explain something I realized it was a major spoiler to something in the story.

The United States has experienced its share of turmoil over the years. Although not particularly as war-torn or stricken with genocide and violent crime as other nations, over time, gun violence and terror attacks have become commonplace on American soil.

Never before has the United States been subjected to widespread coordinated terrorist attacks, devastating enough to bring the entire nation to its knees. Until now.

In this first volume of his Gun Play series, postapocalyptic author C.A. Rudolph will engage you with the tale of two families from wholly diverse walks of life: a husband and wife immersed in a clandestine existence of murder for hire, espionage, and intrigue, and a mainstream middle-class family of six.

Each will find themselves affected by an onslaught of terror attacks the likes of which the world has never seen. Each must learn to survive...or succumb.

A silent enemy lurks among them, and no one knows when they plan to strike. When they do, it will only be a matter of time Until Nothing Remains.

Also by this author: What's Left of My World, This We Will Defend