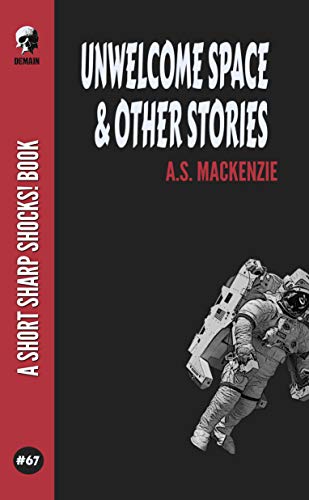 A friend and fellow blogger A.S. MacKenzie wrote a short story and originally shared it exclusively on another blog I love: Kendall Reviews. He’s since published it and I had the pleasure of picking it up to review.

Now, I wanted to read this because I’ve read one other short story from MacKenzie and it really stood out to me.  He had me beta read one a while ago and I really dug the way he wrote a short story. That doesn’t change at all with Unwelcome Space. He’s able to take simple things and make them scary. Take premises that should need to be explained out further and is able to capture the fear or the suspense in a few words. It’s a talent that not a lot of authors have, but MacKenzie has in spades.

Unwelcome Space is a sci-fi horror fast-paced short story. It really doesn’t skimp on the scares at all.  He gets right into it and honestly had me holding my breath to see what was going to happen throughout the few pages that it covers.

The best part about Unwelcome Space is that it could have been stretched out to be a full story – but instead, we got such a great and damn near perfect short story that you can read in one sitting (and not feel ripped off at all).

If you’re interested in more of A.S. MacKenzie’s stories, you can check them out here.

You can also check out some of the audiobooks he’s reviewed for me on the blog.

The crew of the small space research station in orbit were expecting a routine day and maybe a little Halloween fun until one of their astronauts started having trouble outside the station during some routine maintenance.

Their communications with each other, and to command on Earth, broke down through interference. Then, the astronaut’s voice came back through the comms, but it wasn’t their voice. Then something beat against the hatch.

Commander Davis tries to hold their small, international team together while something outside wants in. Something that doesn’t want them out there. Something that will send them back. When in space, the stars are invisible due to the sun shining directly on you. Nothing but featureless black in all directions.

Black, but not empty.