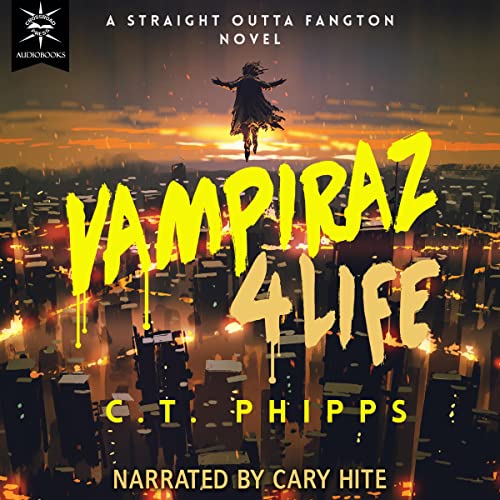 Going into the universe(s) that Phipps has created is still one of my all-time favorite things. There are crossovers and mentions of other characters galore. References to pop culture both old and new. And lots and lots of cheesy jokes. The amazing part is that those alone can sustain a book – but then Phipps throws in interesting and unique characters and plots causing each story to jump off of the pages.

Vampiraz4Life might be the weirdest title I’ve ever typed out for a review but it was an excellent book. Phipps brings these characters to life in ways that surprise me every time. This is the third book in the Straight Outta Fangton series and LOTS of things have happened in the first two books and even more happen in this one. I think this one had more “wtf” moments than any of the other two books so far (and I mean that in a good way).

Peter Stone is one of the many interesting characters that Phipps has created – but the “self-hating vampire” always shines/glitters (haha vampire reference) in these books making me fall in love with him more and more. Vampiraz4Life was no different – Stone was challenged a lot and had to make quite a few tough decisions that affected him and his friends.

Overall, I really enjoyed Vampiraz4Life. I blew through it. So fast that I think it was in the top two of my fastest finishes in Phipps’ collection. Add in the great narration by Cary Hite and you’ve got a wonderfully fun and funny book. Hite was able to grasp the snark and sarcastic tones of all the characters allowing for an already funny book to become funnier.

FROM THE BEST-SELLING AUTHOR OF THE SUPERVILLAINY SAGA:

It’s been a rough year for Peter Stone.

Vampires are not meant to be quarantined and most of the nation is under lockdown. It has been extra hard in the city of New Detroit that depends on tourism not only for its economy but blood supply. With his creator kidnapped, mother dead, and once more exiled to the fringes of their society–he’s ready to call it quits. That’s when he receives a mysterious message from a long-dead friend who tells him that his problems are just beginning.

A mysterious new player in town wants to recruit Peter to help form a supernatural alliance against the oppressive new voivode and his human hunter allies. Unfortunately, Hell itself has sent an assassin against our antihero and even a new set of allies may not be enough to protect him.

Part of the United States of Monsters universe with the Bright Falls Mysteries, Psycho Killers in Love, Morgan Detective Agency, and The Red Room.

Heart of a Dragon by David Niall Wilson