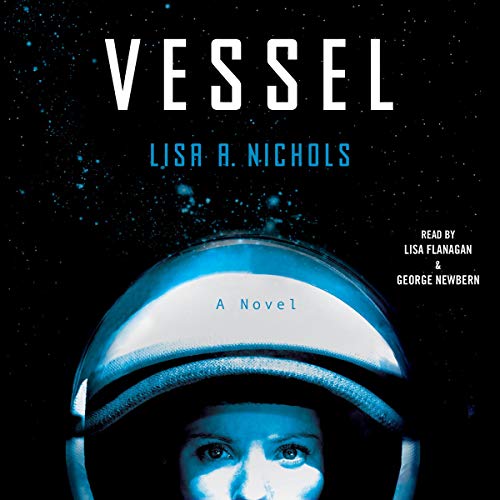 Hooked Me From The Start

Vessel was one of those books that I just knew I was going to like.  From a dual narration to the synopsis – I just had a feeling.  I’m glad I was right – I enjoyed the heck out of Vessel.  Lisa A. Nichols was able to create a world that not only felt believable but I feel like it’s almost a premonition into the world that we may be in soon.

Nichols book tells about an astronaut who returns home after a mission where it was assumed that everyone died. She comes home to a different world, it’s only been 6 or so years but so much has changed.  Her marriage isn’t what she thought it was, her daughter is ready to go to college now, and she cannot remember anything from their touchdown on the

In the synopsis, it says “A tense, psychological thriller perfect for fans of Dark Matter and The Martian.” I can honestly see that.  I have not read Dark Matter but it’s been recommended to me numerous times.  I feel like I should do that now.  It also reminded me a bit of One Way by SJ Morden another fantastic audiobook I read a year or so ago.

I couldn’t put Vessel down.  I had a feeling I knew how it was going to end but I wasn’t completely right.  I had a feeling that I understood some of the foreshadowings that Nichols was employing and I was partially right there as well. An intriguing book that kept me guessing but also kept things comfortable enough that I really needed to know what was coming next.

A great sci-fi novel that was improved with the dual narration of Lisa Flanagan and George Newbern. I thought they did a great job and really added to the story with their storytelling abilities.

An astronaut returns to Earth after losing her entire crew to an inexplicable disaster, but is her version of what happened in space the truth? Or is there more to the story....

A tense, psychological thriller perfect for fans of Dark Matter and The Martian.

After Catherine Wells’ ship experiences a deadly incident in deep space and loses contact with NASA, the entire world believes her dead. Miraculously - and mysteriously - she survived, but with little memory of what happened.

Her reentry after a decade away is a turbulent one: Her husband has moved on with another woman, and the young daughter she left behind has grown into a teenager she barely recognizes. Catherine, too, is different. The long years alone changed her, and as she readjusts to being home, sometimes she feels disconnected and even, at times, deep rage toward her family and colleagues. There are periods of time she can’t account for, too, and she begins waking up in increasingly strange and worrisome locations, like restricted areas of NASA.

Suddenly, she’s questioning everything that happened up in space: how her crewmates died, how she survived, and now, what’s happening to her back on Earth.

Smart, gripping, and compelling, this pause-resisting sci-fi thriller will leave you breathless.

One thought on “Vessel by Lisa A. Nichols (Narrated by Lisa Flanagan, George Newbern)”