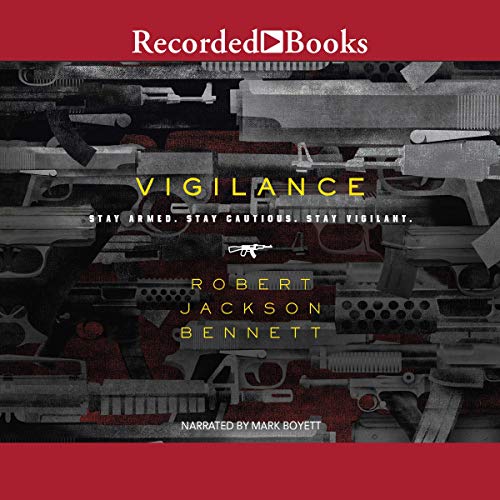 Vigilance tells the story of America’s favorite past-time – mass shootings.  Reading this only weeks after the mass shooting in New Zealand made this feel even more poignant.

The fact that Bennett was able to take politics basically out of Vigilance baffles me.  There was a little backstory on the US and how China has basically taken over.  He also goes into some detail about how all the smart and good people left for other countries, basically abandoning the US – but none of that dealt with political reasons. He turned a book that I would have bet a lot of money would have been political and made it into a book based on marketing instead. Absolutely brilliant.

I hung on every word in this audiobook because it was presented in a way that I knew that they were all going to be important.  Clocking in under 4 hours – I was hoping that Bennett could pull it off.  Not only did he pull it off, he left me feeling completely hopeless and overwhelmed by the story he was able to tell in that time frame.

This review has rambled a bit because I really don’t know what to fully say about it.  It was a brilliant piece written at the perfect time in history.  I hope that we learn from it instead of the Brave New World and 1984’s where we basically let some of it come true – even though we were warned about it.

Overall, one of the most honest and real books I’ve ever read. A book that’ll definitely stay with me for a while.

Robert Jackson Bennett's Vigilance is a dark science-fiction action parable from an America that has permanently surrendered to gun violence.

The United States. 2030. John McDean executive produces "Vigilance", a reality game show designed to make sure American citizens stay alert to foreign and domestic threats. Shooters are introduced into a "game environment", and the survivors get a cash prize. The TV audience is not the only one that's watching though, and McDean soon finds out what it's like to be on the other side of the camera.