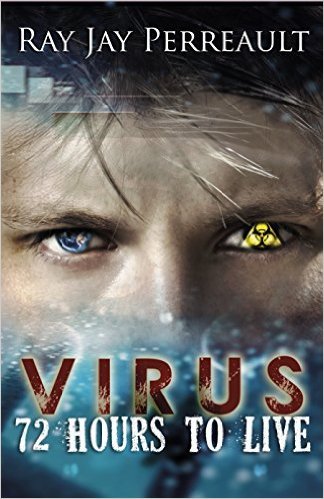 The narration was done by Zachary Johnson — and honestly, I think that he could have done a better job.  Technothrillers are full of big details and broad topics that need a good understanding.  Some people can do a technothriller and not even blink (Joe Hempel) while others seem to get lost in the details.  My only other issue with Johnson’s narration was the lack of differentiation between characters.   One of the biggest problems people seem to have with audiobooks is that they are hard to listen to, especially when characters change a lot.  Unfortunately, this book was hard to follow because of this.

Once again, I fall to the plague (yes, notice the wordplay here) of a book named “virus” and having the biohazard sign.  While, yes this is about the backstory that was left out of SIMPOC, there is not nearly enough talk about the virus that swept through the human population like a wildfire.

The overall story was pretty good.  A lot of the story deals with things that I’ve already read/listened to in books like Calum Chace’s Pandora’s Brain.  Having read other stories that were similar to this both took away from Virus: 72 Hours to Live and helped it.  There were some things that other books have done better and some things that this book did well too.

I really need to stop getting my hopes up for books with virus in the title.  It really lends to a big let down if I cannot get the science and bio-thriller backing that I’m expecting every time.  I think that it honestly sways my reviews a bit too since I’m expecting one thing and getting something totally different.  But, I also know there are others like me out there that think they’re getting one thing when they get another.

Overall, Virus: 72 Hours To Live was an interesting read.  There are better books out there, but there are much, much worse also.

Have you ever wondered how the “Evil Computer” became evil? What would happen if a virus wipes out most of the people on Earth while two computers are coming online? One is a good computer and the other has a different agenda.

While the few remaining humans are trying to survive, the two computers emerge. One may save humanity and the other might come back with a vengeance. I was born in New Hampshire, attended college at Arizona State University and now I’m a retired Aeronautical Engineer who is trying to bring a different style to science fiction writing. I’ve always loved science fiction and I’m trying to write with deeper characters and create stories and situations that a reader can recognize. The be honest I love a hero that has amazing weapons, takes on hundreds of aliens and can survive anything, but I also want to read a situation and be able to relate to it. An extrapolation of what might really happen with a little less stretch in my imagination.

I’ve been fortunate and I flew in the US Air Force for 10 years, during which time I flew C-130’s and visited 27 countries, then I flew T-38″s and trained the best pilots in the world, as well as the first female US Air Force pilots. I was fortunate to spend 28 years in a major aerospace firm and worked on some of the best programs in the world including the F-23, F-35, B-2, Global Hawk and many I can’t tell you about….
I hope I can bring my real life experiences into my writing so you can appreciate my work.