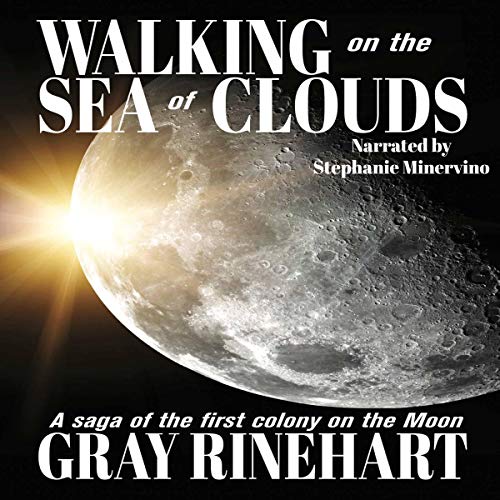 Walking on the Sea of Clouds is one of those books that reads/feels like a non-fiction book but it’s fiction.  Rinehart, from what I can tell, tried to write a book that felt like a biography of the first people to settle on the moon.  The action doesn’t all take place on the moon as he also sets up what the training on Earth would be like. But, Clouds was a very matter-of-fact book. There wasn’t any unnecessary hardship or action in it. Things happened because that is what Rinehart predicted would be a problem in that scenario.

The book, being similar to a non-fiction book did drag a bit for my liking.  There were parts of it that really felt like they were added in because Rinehart wanted to talk about them – but they didn’t, in the end, really have a point to being there.  I won’t go into what, but there were a few cases that I felt this happened. I get it, it’s something really awesome and definitely deserved to be written about – but since this was more of a matter-of-fact kind of story – it didn’t feel like it totally belonged.

The characters in the story were all incredibly real and believable.  They were all well thought out and executed in my opinion.  Rinehart was able to create people that felt like those who would be the first people on the Moon.  In that same vein – he created a company (companies) that also felt real and acted just like I thought they would if this was how life was in 20+ years.

Because the book just kind of existed and nothing absolutely major or catastrophic happens (no major issues like The Martian for example) it loses a little bit of a rating from me.  But it’s definitely made up by good storytelling, good narration, and great character development.

I thought that Stephanie Minervino did a pretty good job.  There were a few times that the voice she chose to use for a person/character was a little off but thankfully those were for side characters that didn’t have a lot of lines.  I can be annoyed with a narrator tries to do the opposite sex but Minervino’s male characters weren’t too bad.  They had a lot of lines and I didn’t really notice it like I usually do. Her pacing and style wasn’t my favorite but it definitely fits the book and the characters well.

Overall, I think this book hits on some things that I believe will happen in the future. It also includes some really cool science that I would love to see a prequel or a short story about (the treatment as an example).  It was a little bit slow at times but I knew going into it that the pacing was going to be that way.

Before permanent lunar encampments such as Clarke's Clavius Base or Heinlein's Luna City, could be built, there would have to be the first settlers - the first people to set up shop and try to eke out an existence on the Moon.

Walking On the Sea of Clouds is the story of such lunar pioneers: two couples, Stormie and Frank Pastorelli and Van and Barbara Richards, determined to survive and succeed in this near-future technological drama about the risks people will take, the emergencies they'll face, and the sacrifices they'll make as members of the first commercial lunar colony. In the end, one will decide to leave, one will decide to stay, one will put off deciding...and one will decide to die so another can live.