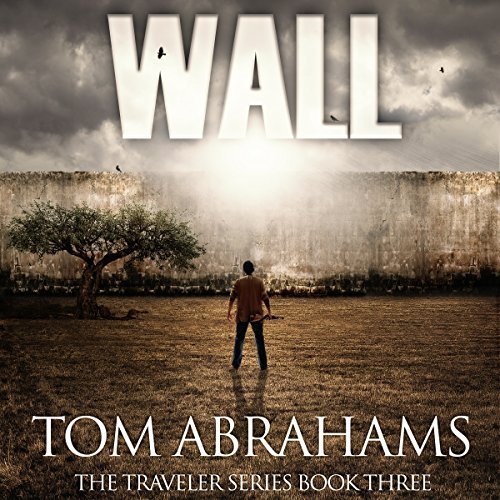 A Battle Is Coming…

A battle is coming, well make that two battles.  One actual battle between the two sides and Marcus Battle, the incredibly resilient good guy in the Traveler Series.

The narration for Wall was done by Kevin Pierce who has done the entire Traveler series and done an awesome job on them.  As I’ve stated time and time again, Pierce just has one of those voices that really makes these post-apocalyptic stories.  It’s no wonder he’s been featured over and over again on my blog considering that’s one my favorite genres.

The story picks up where the other two have left off so I may give some spoilers away.  Battle is still alive and kicking and is now called upon to help more people once again.  I really like the inner angst that Abrahams plays off of.  Battle is a mess internally.  He’s fighting a lot of demons that would cause a lesser man to crumble.  I think that it’s written beautifully — allowing Battle to have his moments, but also recover from them and grow because of them.

The combination of Abrahams writing style and Pierce’s narration really made this book blow by. It felt like one moment I was just starting chapter 1 and the next the book was almost over.  Not every book can do that, but this one definitely made the time evaporate.

Overall, the story was a little different from the first two Traveler books but was different in a needed way.  This book had a lot of conclusions and endings to things.  Without giving anything away, I will say that I was happy and a bit surprised by the ending.

HE SURVIVED THE SCOURGE. HE ESCAPED THE CARTEL. NOW HE FACES THE WALL.

In the chaos of a global plague, evil took hold. Governments fell, the good became servants, and the Cartel rose to power. A wall was built to contain the wasteland and keep the evil at bay. Now an organized resistance wants change. They're willing to fight for it and they've asked Marcus Battle to help. The last thing Battle wants is another war. But if that's what it takes to gain freedom and safe passage to the other side of the wall, he'll take aim and fire.
©2016 Piton Press LLC (P)2016 Piton Press LLC