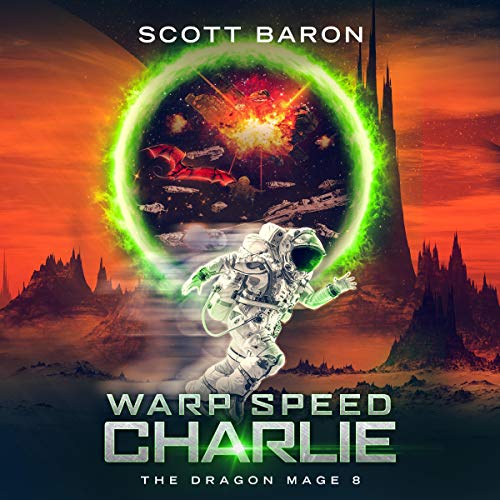 Warp Speed Charlie had some amazing moments in it. If, somehow, you’re not familiar with The Dragon Mage series – but you’re reading this review.  Check out my review of the first book, Bad Luck Charlie, then check out my reviews on the rest of the series. The Dragon Mage series has been nonstop fun since book one (that sounds like an election button), and each book offers something different. A mix/mashup of Science Fiction and Fantasy which can be hard to do well, but Baron nails it. The last few books also feature appearances of characters from Baron’s other series The Clockwork Chimera.

In Warp Speed Charlie, you can sort of feel things winding down. I say that but I know darn well that the ninth book is going to be full of action. There are some arcs coming to a close (not all the way) but you can definitely feel the story starting to wind down. Which is amazing because some parts of the story have been full-speed-ahead for 8 straight books.

I’m sad to see these characters go, but I’m glad to know that I have at least one more book with them. The cool part is I’m going to be finishing this book, then the last book in The Clockwork Chimera, then the final book in this series within a week or so of each other. It’ll allow the series’ to finish up and allow me to take a breath!

There were some scenes (trying not to give anything away) in Warp Speed Charlie that had me cracking up. And there were scenes where I took a big dramatic gasp. I hope that Baron finishes up the stories and the arcs nicely in the ninth book and I feel like he will.

The series has been narrated by the same narrator throughout and he’s done an awesome job with each book. Gary Bennett IS the voice of Charlie and really lends his voice well to this series. He takes already great books and makes them better. I’ve heard a lot of voices in the 4 years I’ve been reviewing audiobooks and I’ve grown fond to his narrations – especially in this series.

I know that they’re not cheap, but I would love to hear the parts of the book with Daisy voiced by Vivienne Leheny and Charlie and crew’s parts done by Bennett. I think that would be an awesome way to end the series, but I get that budgets are tight right now.

Overall, another great addition to the series and one I couldn’t put down no matter how hard I tried.

When your luck just plain sucks in not one galaxy, but two, most people would throw in the towel. But not Charlie. In fact, it almost seemed like he was a glutton for that sort of misery.

His friends were spread across two distant galaxies, separated by a heavily guarded magical portal and struggling to deal with a war now spilling over into both the technological realm as well as the magical one. And it was beginning to look like they’d reached their breaking point.

But Charlie wasn’t about to give up, nor would he give in. If it was war they wanted, it was war they’d get, and he would cross space, and even time, if need be, to protect those he cared for.

He would soon realize, however, that he was facing off against an adversary not only more powerful than any he’d ever battled, but one also possessing a diabolical plan worse than he’d ever imagined.