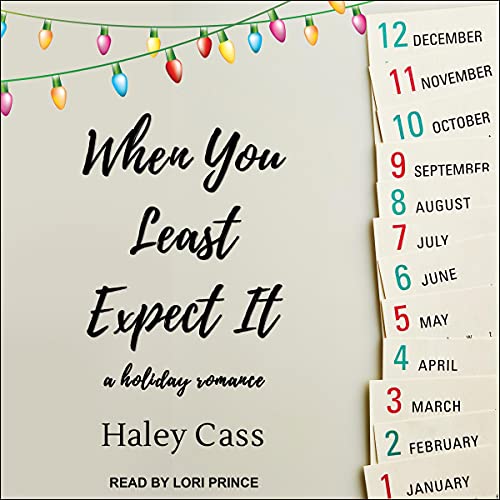 This Was Darn Cute!

Well, isn’t this just one of the cutest stories I’ve read in a while. I think because it was touted as a Holiday Romance I felt like I missed the holiday season after I first picked it up. But now that it’s flowing into the holiday season again – I picked it back up. But, I will say that it’s SO much more than a holiday romance. I think that everything revolves around numerous holidays and that’s probably one of the themes that Cass was going for, but the major theme that I picked up on was the ability to do things yourself along with finding yourself. Those were the two that really jumped out at me throughout When You Least Expect It.

I love that the title works for both of the main characters in this one too. I think that they were both caught off guard by what they were experiencing and feeling. It’s definitely a slow burn, one of the slowest, but that “will they” that I kept thinking has such a nice payoff if you stick with it. It’s not like the chapters and the pages in between and before weren’t good. They were filled with some of the most wholesome and cute content I’ve read in a long time. The way that Caroline is there and is just one of the best friends that Hannah didn’t know she needed was precious. Hannah’s entire journey from divorce to finding herself was brilliant as well.

If you’ve been a reader of my reviews or my blog for any time now, this will be no surprise to you. But, I love Lori Prince’s narration so much. She’s able to add little feelings to the way she says things and honestly turn this into a performance without overdoing it. It’s hard to explain, but even the way that she says things, it just makes me smile. I know it’s the author’s words, but it’s HOW they’re said.

Caroline Parker knows three things to be true. First, she is going to be Boston’s most sought-after divorce attorney by 35. Second, given how terrible her romantic track record is, falling in love isn’t in the cards for her. And third, Christmas only brings her bad luck – being broken up with not once, not twice, but three times during the holidays is proof enough of that.

When she runs into Hannah Dalton on Christmas Eve, she has no reason to believe her luck will change. After all, though Hannah is probably the most gorgeous woman she’s ever seen, she’s also straight. And married to Caroline’s work rival.

While being hired by Hannah throws her for a loop, winning a divorce case and sticking it to her ex-colleague should be enough of a thrill. But as the months slip by, bringing her closer to both Hannah and her adorable daughter Abbie, the lines between attorney and client begin to blur. And she could have never predicted just how much she wants them to.