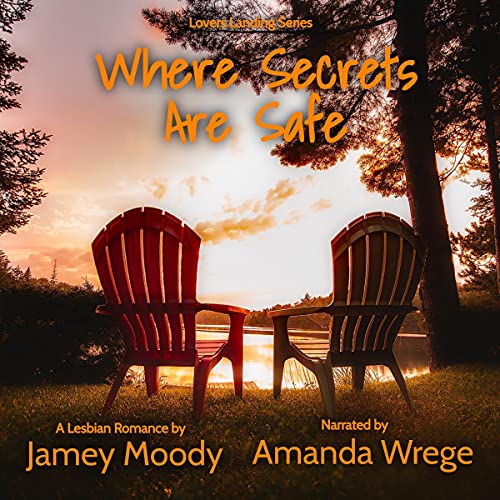 A Safe Place From Hollywood

I went into this one pretty blind. I swore I’d read a book by Jamey Moody before but apparently, I haven’t. That didn’t deter me though. I just featured the third book in this series in my weekly New and Notable post. I picked book one up on sale and decided to give it a shot.

The story in Where Secrets Are Safe is two-fold. There was a story about a place that Krista wanted to open so that her gay friends could come, be together, and not be “outed” for being gay. The other part of the story was a coming-out of sorts and a redemption-type story. I enjoyed both parts and thought that Moody did a good job making the story be about way more than just the women that were there and the place.

Where Secrets Are Safe was cute and definitely kept my attention throughout. My only complaint was that it seemed to be a bit “halted”. What do I mean? I mean that it was written for text, not for audio. Now, a lot of people don’t write for audio and it’s fine. But in this one specifically, it seemed like there were a lot of “Krista said” “she said” type of speech patterns. Now, in some books this is fine, but for some reason in this one, especially earlier in the book it was a bit jarring for me. But as the book progressed there was more action and less talking so the pattern seemed to disappear a bit. I’m curious to see if as Moody continues this series – if that gets better or if that’s just her writing style. Either way, I’m still going to pick the rest of this series up because (even though the ending of this had a “some years later” part – I’m curious where Moody wants to go with the series.

Diving into the audio, the first thing I noticed was that Wrege’s narration was crisp and clear – so much so that it almost threw me off. Now, I’m not saying it’s a bad thing. I may have left my headphones on too high listening to music – but the production quality was good and her performance definitely added to the book.

Overall, Where Secrets Are Safe was a fun and enjoyable book about friends, lovers, and a safe place to vacation away from the prying eyes of Hollywood and the media.

At a Texas lake resort, swimming in romance, an enemy ice queen thaws right into her Hollywood happy ending.

Krista Kyle knew how hard it was to be a closeted lesbian in Hollywood. Unfortunately being out and proud could affect your career. But after 20 years as an award winning actress Krista was able to be her authentic self in a world where being someone else was the norm.

With an opportunity to buy a lake resort with her best friend, Krista creates a safe place where those that weren’t yet ready to live openly in public can come with their partners and girlfriends and be themselves.

When a sleazy journalist, known for outing people, finds out about the hideaway Krista offers to show her what the resort really means and uncovers a secret that changes them both.

This is the first book in the Lovers Landing Series where celebrities find their true love in the most unlikely people.