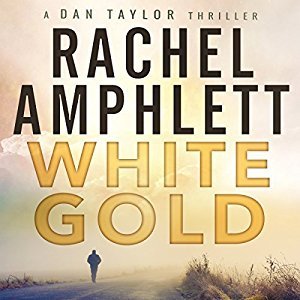 Dan Taylor is a blast!

White Gold — no this is not about the gold that looks like silver, but really a way of refining down gold into a powder that creates energy as a by-product.   White Gold is a Thriller featuring an ex-geologist turned soldier Dan Taylor.  Dan’s soldier days are behind him now and he is searching for meaning when an old friend calls him frantically one night setting off a spiral of action and mystery.

White Gold was narrated by Craig Beck who does a really nice job with it.  The book was originally set in the UK, but ended up taking place all over, so Beck’s voice ended up being really nice for this book.  I did notice a few minor (super minor) faults in the audiobook where there was a repeated word or phrase (I think it happened 3 times) but sadly, I can’t even report them to the author or narrator because I was driving every time I heard one.  Other than that, the quality was pretty good.

Dan Taylor was a really likeable main character. I wasn’t sure how I was going to feel about him in the beginning, but he really grew on me.  He is definitely a character that I will continue to follow into other stories.  The way that he goes about things and figures everything out was really interesting to me. I actually really liked Sarah too, I know that she wasn’t meant to be the main character, but she was a really good #2 to Dan’s #1 status.

The story started off with a bang, literally — but still took a little bit of time to get rolling into the story.  Amphlett took her time making sure that we understood who Dan was and a little bit about his friend that was in danger.  After the first few chapters, the story took off and never slowed down.  The action was fast and the story was really well thought out.

Overall, White Gold was a really enjoyable Thriller.  Dan Taylor was the perfect “hero” for this story and I will definitely be signing on for more Amphlett books featuring Dan.

I was given a free copy of this audiobook in exchange for my honest and unbiased opinion.

A troubled past. A murdered friend. A bomb that will change the face of terrorism.

When Sarah Edgewater’s ex-husband is murdered by a wealthy organisation hell-bent on protecting their assets, she turns to Dan Taylor: geologist, ex-soldier, and lost cause.

Plunged into a global quest for answers, Dan and Sarah aren’t just chasing the truth – they’re chasing a bomb that, if detonated, will change the future of alternative energy research and the centre of England’s capital forever.

White Gold is an action-packed thriller and the first instalment of the Dan Taylor series. If you like Bond-esque heroes, fast-paced action, and international espionage, then you’ll love this suspenseful spy tale.

Rachel Amphlett is the bestselling author of the Dan Taylor thriller series, as well as a number of standalone crime thrillers.

Originally from the UK and currently based in Brisbane, Australia, her novels appeal to a worldwide audience, and have been compared to Robert Ludlum, Lee Child, and Michael Crichton. With plotlines ripped straight out of today’s news, the international settings and colourful characters bring the world of modern espionage to life, exploring complex technology while providing an adrenalin-fuelled reading experience.

An advocate for knowledge within the industry, Rachel is always happy to share her experiences as an author to a wider audience through her blogging and speaking engagements.