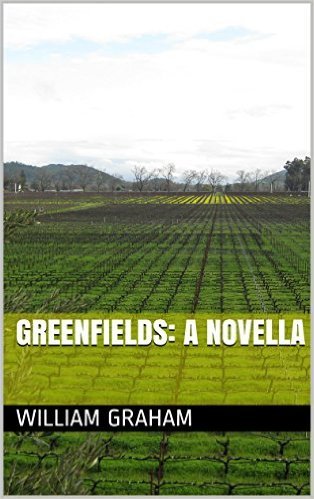 Do we stay and live under the Titans or leave to a place that may not exist?

Set in a world run by corporate leaders, known as Titans.  This story is a quick foray into a world that is fascinating.  It follows a group of people who are trying to decide to break away from the city.  They feel like there is more for them outside the world that the Titans rule over.  Greenfields is part Soylent Green and part futuristic dystopian.

Michael Gilboe does the narration in this, and does an excellent job.  The pacing was perfect and his voice was easy to listen to and follow along with.  I will definitely be looking for other Gilboe narrated books in the future.

Novellas and short fiction are two of my favorite types of writing styles.  You have to fit so much into such a short amount of time/space that you need to be a good writer to do so.  This story falls a little short (especially compared to Graham’s other novellas).  I just felt like there needed to be a little bit more.  As soon as the characters were developing slightly and there could have been the slightest amount of adversity the book just ended.

I liked the story and premise, I think that either a longer novella/short story or even a full novel could be brought from Greenfields.

Part of the story had an air of Soylent Green, but it was a nice change from that story too.

I will continue to pick up Graham’s short fiction because he is able to develop a world in 40 pages that some authors cannot in 400.

Set in the future, in the fictional land of Aradmore, this audiobook chronicles the struggles of James, Helena, and their family. After a climate disaster, society is now run by a group of corporate leaders called the Titans, who live in gleaming cities while ordinary workers, like James and Helena, are forced to live on reservations. All laws are made by – and all privileges are held by – the Titans.

Residents of the reservation struggle to survive. Citizens are not allowed to live past the age of 75. James and Helena decide they must break away. They leave on a trek to the district of Greenfields, where they can start their lives over again.

Greenfields is the thrilling story of how one family fights to overcome social injustice. Poet, novelist and travel writer William Graham holds a BA and MA in English and a MS in Communications from Northwestern University in Evanston, Illinois. He lives in Stowe, Vermont. Visit his travel blog at https://www.travelblog.org/Bloggers/Green-Mountains/. Many of his books are also available on Audible.com