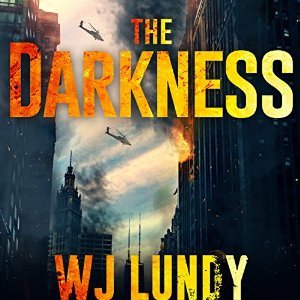 Jacob Anderson and family are fighting a battle they don’t quite understand.  They heard news stories of riots and issues in the city, but they weren’t sure what was happening.  They decided to leave their quiet neighborhood for somewhere safer when they were plowed into by another car.  The people in the car were not… there anymore, they were replaced, or something else.  The book starts off quick and just gets quicker as you follow Jacob in his attempt to figure out what is happening to these people, and tries to keep his family safe.

The narration of this is very well done.  Professional and emotional.  I like hearing what I feel like the author is trying to write out in a narrators voice.  Kevin T Collins does a great job.  His pacing and emotion made my heart race numerous times during this book.  The pacing of the novel helps but Collins’ narration made it even better.

This is one of those books where it feels like everything is working against the main characters.  Seriously, there were moments that I felt like the book was just going to end at any minute where everything comes crashing down. Without giving anything away, this book really had numerous times where I thought that the main characters were done and gone.

Overall, I really enjoyed this book. It was fast-paced but steady — like a marathon runner.  This book kept my attention very well because I really didn’t know what was going to happen next.

I was given a copy of this from AudiobookReviewer.com in exchange for an honest review.

The Darkness is a fast-paced story of survival that brings the apocalypse to Main Street USA.

While the world falls apart, Jacob Anderson barricades his family behind locked doors. News reports tell of civil unrest in the streets, murders, and disappearances; citizens are warned to remain behind locked doors. When Jacob becomes witness to horrible events and the alarming actions of his neighbors, he and his family realize everything is far worse than being reported.

From the Best Selling Author of Whiskey Tango Foxtrot comes a new telling of Armageddon.

W. J. Lundy is a still serving Veteran of the U.S. Military with service in Afghanistan. He has over 14 years of combined service with the Army and Navy in Europe, the Balkans and Southwest Asia. W.J. is an avid athlete, writer, backpacker and shooting enthusiast. He currently resides with his wife and daughter in Central Michigan.

I developed the Whiskey Tango Foxtrot series from notes and ideas I had put together while deployed to Afghanistan. I had been jokingly asked how we would defend against a zombie attack. Escaping the Dead was written in a small spiral notebook and later clicked one key at a time into a word document once I arrived back home. At the success of the short story the series was born.

All along I wanted to tell a story that portrays the military that I know, the people I serve with, their characteristics, and something that shows our true actual capabilities. These are my thoughts, I hope you enjoy them, and thank you for reading.