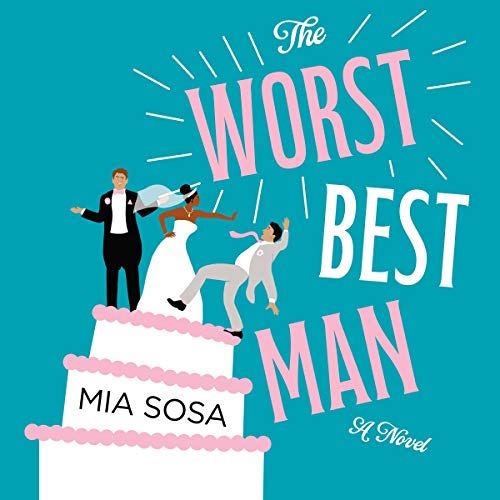 I Liked The Story

I want to get it out of the way first thing here. I really enjoyed this book. The story was cute, powerful, and everything I’d hoped it would be and more.  Mia Sosa wrote such a cute story that dealt with a lot of social issues without making them front and center. The scenes where Carolina is talking about being emotional and what that can do to her career (or life) wasn’t eye opening to me per se but it was definitely interesting to hear written out and also interesting to hear Max listen and realize it.

The Worst Best Man also deals with jilted love, brotherly competition, and the fear of opening yourself up. I thought that all of these issues were well weaved into the story and instead of being like “oh, okay, Sosa is talking about this now” it was just part of the story.  When Lina and Max where at the retreat – the scene there felt realistic but also covered a lot of the topics I just mentioned in a very short amount of time.

The story itself wasn’t fully predictable but also had that familiar feel to it (with a unique cast of characters). I liked the wedding planner aspect, and the fact that the wedding planner was left at the alter was also fun and interesting. I thought that the enemies-to-lovers and the growth that both characters showed was cute and felt realistic.

Overall, an enjoyable romantic comedy novel that I flew through.

My only complaints are about the narration. The female narrator, Rebecca, was really good. I also think this story suffered a bit when Wayne Mitchell tried to do Lina’s voice. It felt… disrespectful and a little condescending. I couldn’t put my finger on it – but when Mitchell had to do Lina’s voice I always cringed a little. The reverse of that was fine – I thought that Mozo did a fantastic job both when voicing Max but just making this story her own.

A wedding planner left at the altar? Yeah, the irony isn’t lost on Carolina Santos, either. But despite that embarrassing blip from her past, Lina’s offered an opportunity that could change her life. There’s just one hitch…she has to collaborate with the best (make that worst) man from her own failed nuptials.

Marketing expert Max Hartley is determined to make his mark with a coveted hotel client looking to expand its brand. Then he learns he’ll be working with his brother’s whip-smart, stunning – absolutely off-limits – ex-fiancée. And she loathes him. If they can nail their presentation without killing each other, they’ll both come out ahead. Except Max has been public enemy number one ever since he encouraged his brother to jilt the bride, and Lina’s ready to dish out a little payback of her own.

Soon Lina and Max discover animosity may not be the only emotion creating sparks between them. Still, this star-crossed couple can never be more than temporary playmates because Lina isn’t interested in falling in love and Max refuses to play runner-up to his brother ever again….

The Love Song of Ivy K. Harlowe by Hanna