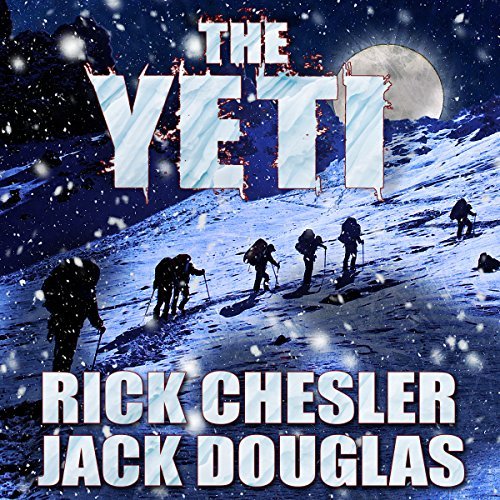 Why Do We Climb? Because It’s There.

Dr. Zack Hitchens loses his wife in a senseless accident, he decides to follow her dreams all the way to the roof of the world– the peak of Mount Everest. While he’s up there he discovers a lot more than he originally thought he would about himself, the other climbers, and the snow beast known as Yeti.

The narration for The Yeti was done by Jeffrey S. Fellin, who again does a phenomenal job.  I believe this is the best book I’ve listened to by Fellin.  He was able to capture a lot of the nuances that Chesler wrote into the book.  He also used a few tricks to really draw the listener in like using a radio noise when the characters were talking on a radio (an incredibly simple way to make things feel more real). As I said before, I will continue to be on the lookout for more books by Fellin, especially those that combine with Chesler.

Wow, what a ride The Yeti was.  I wasn’t sure what I was getting into, but I can tell you this.  The Yeti is Chesler’s best work to date.  I haven’t read a book by him that I haven’t enjoyed, but the drama and peril that he was able to capture in this book is unparalleled.

The main character of this book could have been the drama and the peril.  They really took center stage. Chesler and Douglas really wrote this book to make the reader feel like they were there, or at least feel like these characters were real and going through all of these things.  I can tell that they did a lot of research into Everest expeditions because everything just felt like it was exactly as it would play out in real life.  I loved the realism of the ascent.

The book, while being titled The Yeti, was almost more about Zack’s re-finding and redefining himself.  I really felt for Zack numerous times throughout making it feel even more real.

While the yeti is definitely a part of this book, it was secondary.  Being secondary doesn’t make it any less scary.  The way it was written about reminded me of how Bruce (the shark from Jaws) was never really shown front and center.  You always knew that he was around by the music playing, and his attacks always seemed to happen off-screen.  The same was true here.  You could definitely tell the snow beast was there and killing things, but it didn’t have to be described or even seen to be terrifying.  Just the smell or the noise would scare the heck out of the climbers (and readers).

Overall, The Yeti is easily the best work by Rick Chesler, and I really enjoyed it.  I started it and almost finished it in one sitting.  I couldn’t pull myself away from it.  I had to know how it ended.

The most infamous cryptid ever to capture the imagination of the planet.

A man putting his life at risk.

When evolutionary biology professor Dr. Zack Hitchens loses his wife in a senseless accident, he decides to follow her dreams all the way to the roof of the world – the peak of Mount Everest. On the infernal mountain, Zack and his teammates battle sickness, whiteout conditions, avalanches, the oxygen-starved minds of other climbers – and something else. Something primitive and consumed with rage. Something seeking revenge.