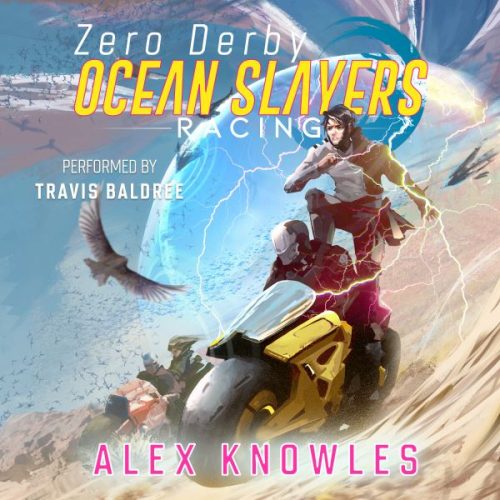 Zero Derby is the second book in the Ocean Slayers Racing series and what a series it is so far. Knowles really knows how to take my emotions through a rollercoaster in this one. Zero Derby has some of the darkest scenes in this series so far but is able to do so in such an entertaining and interesting way. I think Knowles knew exactly what they were doing and would throw a cute scene in one moment and then they’d be fighting for their life another. Or it would be all good then, BAM curveball. I love the back and forth and it made reading this so fun and entertaining.

It’s really hard to write a review of a book like this without talking about the things and the scenes that really stood out. Especially since some of them were towards the very end of the book. But, if I could sum it up in some way it’s that the bonds that are made in Zero Derby are amazing. Each one is different and the ways that Knowles was able to write different bonds between different characters and things really made this one for me. They were able to really show different sides of each character while also creating deeper roots to the things that we love about each one. Oto, for example, has always tried helping others. He’s challenged in Zero Derby to his core and he’s really forced to make hard decisions numerous times.

The different styles of races in this also added to my enjoyment. The derby was action-packed and even the training for it made for some really interesting scenes. But the final race (see front cover) was really something. I’ve watched real races that were similar (obviously they weren’t being attacked by creatures) that make teams race an endurance-style race, but Knowles really took it up a notch or two with this one.

Overall, Zero Derby was a blast. Fast-paced action with characters you fall in love with. What more could you ask for? Oh yeah? Still not sold. Travis Baldree narrates it. Yeah, that’s what I thought. (In all fairness, if you don’t know how good Baldree is, pick up one of the Ocean Slayers Racing books and be prepared to be blown away – he’s the gold standard for LitRPG books, and for good reason).

I think my favorite part about each one of Knowles’ series is that they have similar “feelings” as a reader I was made to feel deeply and care about these characters. But each one has a different plot and a different setting allowing each one to feel completely different and unique.

Get it free with Kindle Unlimited

Oto has taken his first steps towards the life he’s always dreamed of, but that means he has more to lose than ever before.

Dreams are expensive, though, and the Ocean Slayers need cash to pay their debts—and safe cash isn’t fast enough.

With his options disappearing quickly, only bad choices remain. He’ll have to push himself and his team to the brink just for the chance to keep all of their dreams alive…

Some things are worth risking everything for.

SpeedRunner (Tower of Babel #1) by Adam